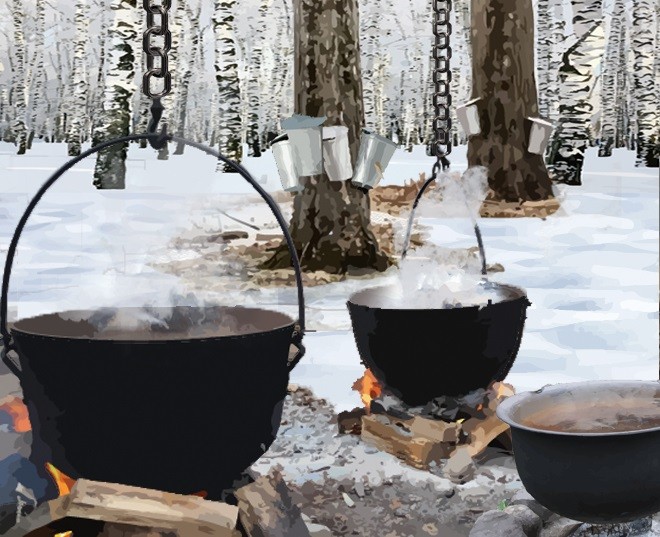 maple syrup
in a drop on a plate
a floundering ant
--Serhiy Shpychenko (Kyiv, Ukraine)

The way the haikuist plays with his breakfast compares with the daily urge to fill letters in all the squares of the web-based word game “Wordle.” Francoise Maurice loves souvenirs. Canadian Mary Vlooswyk says she packs a few maple-leaf-shaped bottles whenever she travels, “just to have a taste of home.” Ljiljana Dobra over-packed. Keith Evetts regretted not sitting on the veranda more often in Thames Ditton, U.K.

Montreal--
cans of maple syrup
in his luggage

at customs
excess weight in the suitcase--
maple syrup

the girl next door
how sweet she was
had I noticed

mom and dad
and those Sunday breakfasts--
the 1950s

the maple and I
celebrate our scars--
sugar moon

the scar
on the old tap hole
longest night

Julia Guzman penned this one-line haiku when she heard snowmelt in Cordoba, Argentina: walking around... the sound of water on the river stones.

Enjoying a sunny day in Marmora, Ontario, John Hamley asked: “On which of these three-lines, if at all, could a hyphen be effectively placed?”

Robin Rich spotted spots on the back of a tiger’s ear at the zoo. Refika Dedic’s sense of fear grew overnight while lying on the cold ground.

fog
homeless and
tiger in the forest

These haiku by Patrick Sweeney and St-Laurent, respectively, will make your teeth tingle.

long icicles
sinking into the dark flesh
of the empty apartment

open-mouthed
my dentist goes into raptures
about maple syrup

While window shopping, Nickolay couldn’t resist buying something to brighten a cloudy day. John Zheng penned an ekphrastic haiku while admiring a monochrome photograph taken in Mississippi in the 1930s by Eudora Welty. Ignatius Fay bought a gift in Sudbury, Ontario.

cloudy new year
my crush for
the red coat

window shopping
her curious eyes reflected
on the window

Devoshruti Mandal was entranced by a golden glow in Varanasi, India. Kanematsu was hypnotized by the way winter vines produced an intricate pattern of interlaced black lines on a cement wall. Ramona Linke was spellbound by tiny ice crystals that fell between conifers. Tsanka Shishkova followed gnarled branches.

maple syrup...
she wiped sunrays
off the floor

Year of the Tiger
diamond dust trickles
from the black pines

lace shadows
on the cherry-lined path
aroma of spring

among maple leaves
sharing my death poem
with robins

robin’s carol
a friend with the same name
sipping scotch

handsome stranger
the maple with nice leaves
doesn’t give syrup

Mandal wrote a tribute to Joe Canadian, a plaid-shirted character who promoted his country and favorite beer in a television commercial at the turn of the century. Maurice looks forward to the start of this year’s sugaring off season when maple syrup producers fill their buckets with sap.

Immortality--
joe canadians
on every shelf

fresh snow
the last can of maple syrup
on the shelf

Luminita Suse is happy whenever it snows in Gloucester, Ontario, according to this haiku that was originally published in a “Haiku Canada” members’ anthology. In Bedford, U.K., Paul Millar fancied himself as an Olympic skier.

happiness
the first and the last
snow

after work
slaloming
through the crowd

Teiichi Suzuki spent the day in Osaka admiring winter trees and roses. Turner rebloomed. Sweeney was nonplussed by the cloudy weather. Randall Herman may have meditated on the path to emptiness and formlessness in Victoria, Texas.

Zelkova
holding up the weight
of snow clouds

winter rosebud--
another chance
to bloom

The next issue of the Asahi Haikuist Network appears March 18. Readers are invited to send haiku related to the color green on a postcard to David McMurray at the International University of Kagoshima, Sakanoue 8-34-1, Kagoshima, 891-0197, Japan, or e-mail to (mcmurray@fka.att.ne.jp).