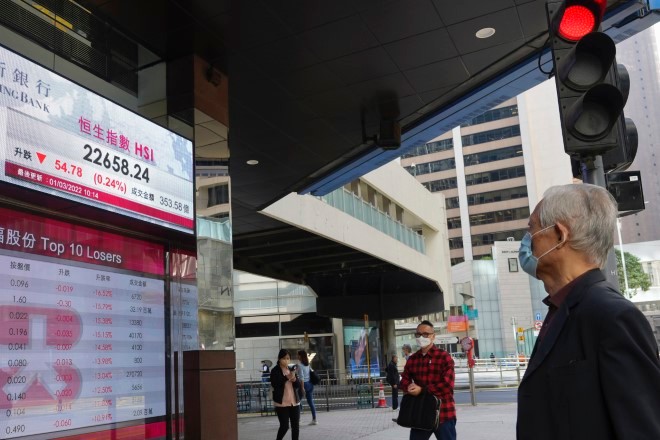 Asian shares rose Tuesday as global investors eyed talks aimed at ending the Russian military assault on Ukraine, which so far have yielded just an agreement to keep talking.

Benchmarks were higher in early trading in Tokyo, Sydney and Shanghai. Hong Kong declined and markets were closed in South Korea for a holiday. U.S. futures edged lower and oil prices rose.

Surging oil prices and increasing financial pressure from the U.S. and allies on Russia, one of the world's largest energy exporters, for its invasion of Ukraine are adding to uncertainty about the global economic outlook.

Russian forces shelled Ukraine’s second-largest city on Monday, rocking a residential neighborhood, and closed in on the capital, Kyiv, in a 40-mile convoy of hundreds of tanks and other vehicles.

“The end game continues to elude. While the ceasefire talks at the Belarus-Ukraine border ended, the military fires certainly have not ended by any means alongside sanctions being raised further,” Tan Boon Heng at Mizuho Bank in Singapore said in a commentary.

“Asian equities were higher on Tuesday mirroring a mild rebound on Wall Street and following talks between Russia and Ukraine. The market’s focus will continue to be on geopolitical tensions, at least in the short term,” Anderson Alves of ActivTrades said in a report.

The value of the Russian ruble plunged to a record low after Western countries moved to block some Russian banks from a key global payments system. On Monday, the U.S. Treasury Department announced more sanctions against Russia's central bank.

Governors and lawmakers in numerous U.S. states, seeking to add to the financial squeeze on Russia, were taking steps to pull state pension and treasury funds out of investments in Russian-held entities or Russian companies supporting the war.

Early Tuesday, the ruble was down 3.2 percent at 104.51 to the dollar. The Moscow Stock Exchange was closed.

Ordinary Russians facing likely higher prices and crimped foreign travel due to Western sanctions lined up at banks and ATMs on Monday. Deeper economic turmoil may loom if price shocks and supply-chain issues cause Russian factories to shut down due to lower demand.

The Biden administration said Germany, France, the UK, Italy, Japan, European Union and others will join the U.S. in hitting Russia’s central bank.

“Right now the situation is fluid and investors are looking for the next shoe to drop,” said Barry Bannister, chief equity strategist at Stifel.

Markets already were on edge before Russia’s invasion, worried about upcoming hikes in interest rates by the Federal Reserve, which would be the first since 2018.

The war in Ukraine is raising expectations that the Federal Reserve may have to adopt a gentler approach to raising interest rates in order to fight inflation.

Fed Chair Jerome Powell is to testify before Congress later this week and could offer clues on the path ahead. A report on Friday will also show whether strength in the U.S. jobs market continued in February, allowing the Fed more leeway to raise rates.

The Fed is treading a tightrope, needing to raise rates enough to curb inflation but not by so much as to choke the economy into a recession. Higher rates also put downward pressure on various investments from stocks to cryptocurrencies.

“Expectations are that central banks are going to take a somewhat slower and more cautious approach as a result of this crisis, so that provides a positive offset for risky assets,” Jonas Golterman, senior global markets economist at Capital Economics, said in an online briefing Monday.

Brent crude, the international standard, rose 68 cents to $98.65 per barrel. Oil prices on both sides of the Atlantic have been surging amid concerns about what will happen to crude supplies.