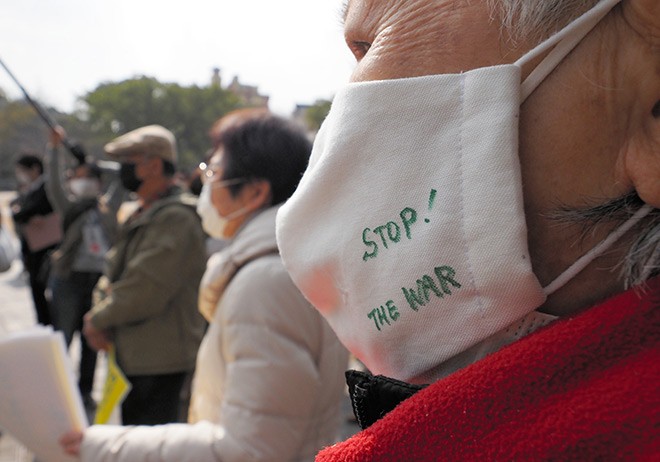 An atomic bomb survivor sports a face mask bearing an anti-war slogan at a protest rally in Nagasaki on Feb. 26. (Shoma Fujiwaki)

Former Prime Minister Shinzo Abe was bitterly attacked by survivors of the atomic bombings of Hiroshima and Nagasaki for floating the idea of Japan “sharing” in the possession of nuclear weapons in the aftermath of Russia’s invasion of Ukraine.

Abe made the suggestion during a TV program aired by Fuji Television Network Inc. on Feb. 27. He stated that nuclear sharing should be discussed as an option for Japan to defend its territory and people.

Koichi Kawano, chairman of the Liaison Council of Hibakusha, Nagasaki Peace Movement Center, assailed Abe for encouraging the discussion of a nuclear option.

“His comment flies in the face of Japan’s course to move toward the abolition of nuclear weapons,” said Kawano, 82. “Discussing (nuclear sharing) is out of the question.”

Kawano also showed his disdain for Abe on Aug. 9, 2017, when the two men met an annual ceremony held in Nagasaki to mark the city's atomic bombing in 1945.

In reference to the government’s reluctance to join the Treaty on Prohibition of Nuclear Weapons that was signed earlier that year, Kawano asked Abe, “Which country’s prime minister are you?”

While Japan relies on the U.S. nuclear umbrella for its defense, it has adhered to the decades-old three non-nuclear principles of not possessing, not making and not allowing the introduction of nuclear weapons.

Kunihiko Sakuma, a director of the Hiroshima Council of A-bomb Sufferers, called Abe’s comments “shameful” as they came from a former leader of the only country to have experienced atomic warfare.

“This is the very time for Japan to become the first country in the international community to speak against nuclear weapons as a misguided path,” said Sakuma, 77. “What Japan should do is to restore diplomacy, not (talk about an) expansion of armaments. Japanese are supposed to be fully aware of the catastrophic consequences of nuclear weapons being brought into their country.”

Tomoyuki Mimaki, a representative of the Hiroshima Prefectural Confederation of A-Bomb Sufferers Organization, also denounced Abe for his comments.

“What he said is something a politician who served as prime minister of this county should not have taken up casually,” said Mimaki, 79. “I want our country to steadfastly stick with the three non-nuclear principles.”

However, he did not dismiss Abe’s comments out of hand, indicating there is a genuine need to reassess the three non-nuclear principles.

“Are we going to live with the values of a bygone era for all the years to come?” he asked.