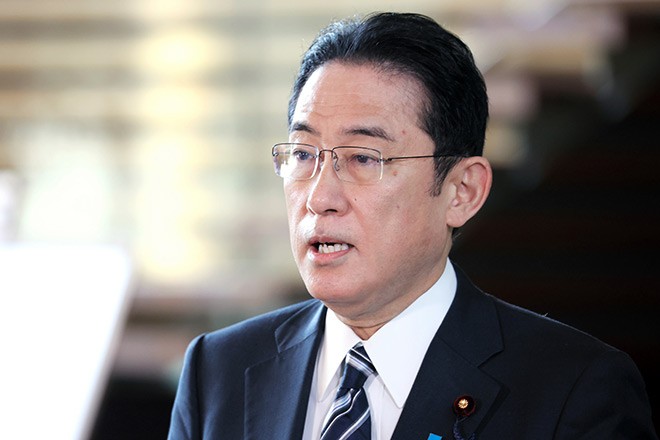 Prime Minister Fumio Kishida answers questions from reporters after his talks with Group of Seven leaders and EU and NATO representatives on March 1. (Koichi Ueda)

Prime Minister Fumio Kishida said March 1 that he told his counterparts in the Group of Seven that Russian President Vladimir Putin’s threat to use nuclear weapons following his invasion of Ukraine was unacceptable.

“I, as prime minister of the only country in the world that has experienced nuclear bombings and who represents a constituency in Hiroshima, stressed during the talks that nuclear weapons must not be used or threatened for use,” Kishida told reporters after the online meeting.

The teleconference, proposed by U.S. President Joe Biden, involved leaders of the G-7, Ukraine’s neighbors Poland and Romania, as well as high-ranking officials of the EU and NATO.

The attendees detailed their assistance to Ukraine and their views on the war situation, according to Japanese officials.

After the West slapped sanctions on Russia over its full-scale invasion of Ukraine, Putin on Feb. 27 ordered his nuclear forces into “special combat readiness,” raising the alert status and sparking serious concerns in the international community.

The G-7 leaders agreed on the strong condemnation of Putin and the need to impose harsher sanctions against Moscow. They also affirmed they would work together to support the Ukrainian government and refugees fleeing the war, according to the officials.

Kishida said that he repeated at the session that the global community must respond to Russia with a stern and uncompromising attitude because Russia’s military action erodes the foundation of the international order.

The prime minister told reporters that Japan is proceeding with sanctions against Moscow while coordinating with other countries.

Kishida also confirmed that Japan will punish Belarus for assisting in Russia’s military operations, including punitive measures against Belarusian President Alexander Lukashenko and other individuals and entities. That step was announced on the night of Feb. 28.

Japan on Feb. 28 also announced that it will offer at least $100 million (11.5 billion yen) in loans and another $100 million in humanitarian assistance to Ukraine.

On March 1, Japan imposed tighter economic sanctions against Moscow, freezing the assets of six Russian government officials, including Putin and Foreign Minister Sergey Lavrov, as well as those of Russia’s central bank and two other financial institutions.

The sanction against the central bank is aimed at deterring it from using yen reserves to try to prop up the plunging ruble.

“I believe the sanctions will generate the intended outcome,” Finance Minister Shunichi Suzuki said after a Cabinet meeting on March 1. "The Russian central bank’s raise in its key interest rate indicates the sanctions are working.”

Kishida also said he talked with Ukrainian President Volodymyr Zelensky for about 10 minutes on the night of Feb. 28, informing him about Tokyo’s additional sanctions against Moscow in a show of support for Ukraine.

The prime minister said Zelensky expressed gratitude for those steps.

Putin’s reference to his nuclear forces infuriated hibakusha in Japan.

Hiroshima Mayor Kazumi Matsui and Nagasaki Mayor Tomihisa Taue said Feb. 28 they have sent a joint protest letter to Putin, urging him “not to create a third victim following Hiroshima and Nagasaki.”

“We make a solemn protest against the series of Russia’s actions hinting about the possible use of nuclear weapons,” the letter said, according to the mayors. “It tramples on the earnest wishes of hibakusha atomic bomb survivors, enraging people in Hiroshima and Nagasaki.”

The mayors pressed for an immediate halt to the invasion and a peaceful solution to end hostilities.