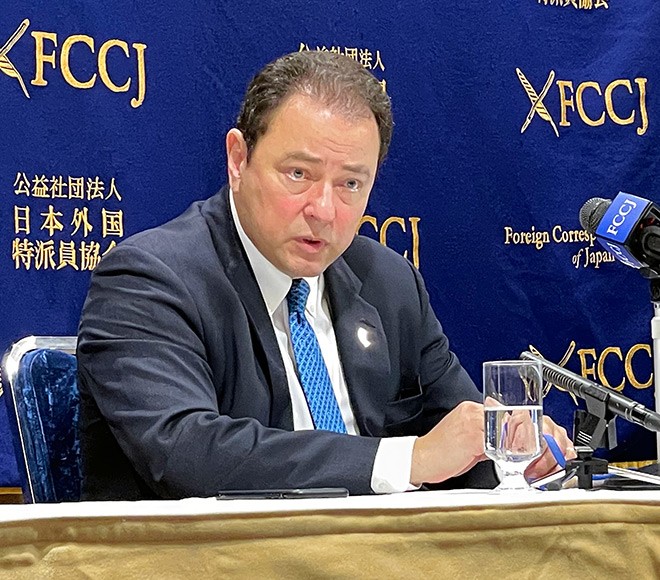 Sergiy Korsunsky, the Ukrainian ambassador to Japan, speaks at the Foreign Correspondents’ Club of Japan in Tokyo on Feb. 25. (Rihito Karube)

More than 60,000 people around Japan donated nearly 2 billion yen ($17.4 million) to the Embassy of Ukraine in Japan to help the country in its time of need.

Sergiy Korsunsky, the Ukrainian ambassador, said donations poured in after the embassy set up a bank account Feb. 25 to solicit financial humanitarian support from Japan.

As of March 1, the figure for donations stood at nearly 2 billion yen, Korsunsky said during a meeting with Kenta Izumi, the head of the Constitutional Democratic Party of Japan, in Tokyo.

“A normal life in Ukraine has been destroyed,” Korsunsky said in expressing gratitude for the support.

“Schools, hospitals and administrative agencies have been damaged. Enormous amount of money will be needed to reconstruct (Ukraine),” he added.

“All of the donated money will be used for humanitarian aid and reconstruction projects,” he said in a plea for more support.

Korsunsky also posted a message March 1 on his Twitter account to call for a consumer boycott of Russian products.

“In Japan, you can buy a lot of (Russian) products, like food or drinks,” he wrote. “Buying Russian, you directly finance the war.”

He noted that a lot of Ukrainian products are also available in Japan.

“Buying Ukrainian, you support peace, help Ukraine to resist to Russia. The choice is yours,” he wrote.