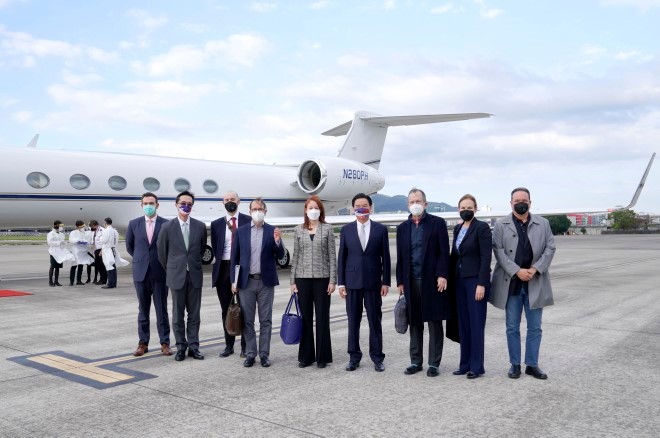 In this photo released by Taiwan’s Ministry of Foreign Affairs, Taiwan’s Foreign Minister Joseph Wu, fourth from right, stands with an American delegation including former Chairman of the Joint Chiefs Adm. Mike Mullen, third from right, as they arrive at Taipei Songshan Airport in Taipei, Taiwan, March 1, 2022. (Taiwan Ministry of Foreign Affairs via AP)

TAIPEI--A delegation of former U.S. defense officials arrived in Taiwan on Tuesday in a sign of stepped-up communication between the sides amid a looming threat from China.

Former Chairman of the Joint Chiefs of Staff Mike Mullen is leading the five-person delegation that is to meet with President Tsai Ing-wen and other top officials during the two-day visit. They were greeted at Taipei’s Songshan Airport by Taiwanese Minister of Foreign Affairs Joseph Wu, who bumped elbows with the group members.

Tsai’s office said the delegation had been appointed by U.S. President Joe Biden and the visit would permit “an in-depth exchange of views on Taiwan-U.S. cooperation issues in various fields.”

Separately, former U.S. Secretary of State Mike Pompeo is to arrive in Taiwan on Wednesday. Pompeo, who earlier led the Central Intelligence Agency, will also meet with Tsai and address a forum, according to the Foreign Ministry.

Russia’s invasion of Ukraine has drawn fresh attention to China’s threat to use force to annex self-governing democratic Taiwan, which it claims as its own territory.

Circumstances are very different, however. Taiwan lies 160 kilometers across the Taiwan Strait from mainland China and enjoys strong support from the U.S., which is legally bound to ensure the island can defend itself and to treat all threats to it as matters of “grave concern.”

China has not condemned Russia’s war against Ukraine and its criticism of sanctions leveled against Moscow is widely seen as a sign of commitment to the two countries’ mutual defiance of Washington and the West, despite Beijing’s longstanding defense of the principle of national sovereignty.

In Beijing, Chinese Foreign Ministry spokesperson Wang Wenbin dismissed the U.S. delegation’s visit, saying it was “futile for the U.S. to send anyone to demonstrate its so-called support for Taiwan.”

Wang told a daily briefing that China urges the U.S. to honor past communiques signed with China, “stop all forms of official exchange with Taiwan, and handle Taiwan-related issues with caution so as to avoid further serious damage to the overall situation of China-U.S. relations.”

China has been sending military aircraft into Taiwan’s air defense identification zone on a near-daily basis, and on Saturday, its Defense Ministry protested as provocative the passage of the guided-missile destroyer USS Ralph Johnson through the Taiwan Strait.

The strait is in international waters and the U.S. Navy said the ship’s passage “demonstrates the United States’ commitment to a free and open Indo-Pacific.”

China routinely protests U.S. contacts with Taiwan’s government and announced in November that its military conducted air and naval readiness patrols in the direction of the Taiwan Strait after five U.S. lawmakers met with Tsai on an unannounced one-day visit.

Biden has followed his predecessors in stepping up contacts between Taiwan and both serving and retired administration officials, along with selling it military equipment.