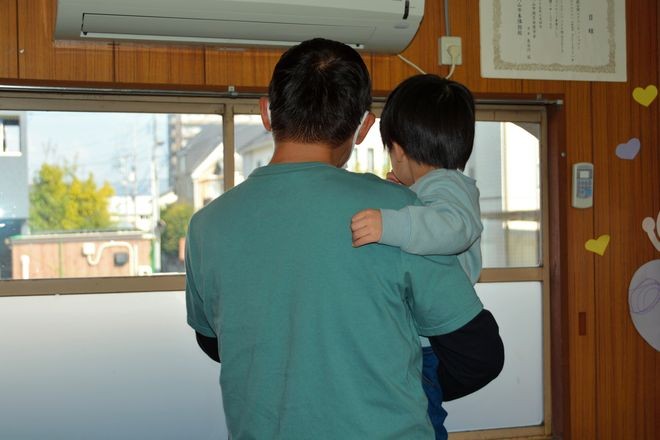 A volunteer cradles a boy in his arms while looking out the window on Nov. 20 in Okayama after the child’s playtime. (Mayo Tomioka)

A 3-year-old boy clung to a 51-year-old volunteer, making for a heartwarming scene at a children’s home in Okayama.

“Hold me,” the boy said and shyly pushed his face into the man’s chest.

The man hugged him tightly, and the child quickly raised his head and smiled.

Then, as the man watched groups of children play house and push their toy trains, an elementary school girl came forward to jump on his back.

This busy volunteer is a registered member of the civic group Gruun, based in Okayama, and has been going to the Zenrinkan children’s home about four times a month for the past five years.

The children at Zenrinkan have quickly taken a liking to their frequent visitor.

The man said he pays attention to each of their personalities so he can keep a proper distance, but many of them gravitate toward him anyway, even when they first meet.

“They may want someone to cling to,” he said.

Ryuichi Iwai, 54, manager of Zenrinkan, expressed gratitude for his help.

“He regularly comes to play with children, so they look forward to seeing him each time,” said Iwai.

Iwai said the facility’s staffers are busy with washing, cleaning and clerical tasks at the establishment, making it hard for them to spare much time to spend with the kids.

GAVE THE GIFT OF LOVE

The hug program was originally started by the late Mikako Ario, a single mother with two children in Kanagawa Prefecture.

She explained how and why she started on her quest in a video and on her blog available on Gruun’s official site.

“I wondered what would happen to my children if I became sick,” Ario said.

She also said she came across a scene of abuse and wanted to have connections with shelters for kids who were mistreated or in need of help.

Ario learned through sending gifts and other volunteer work that what children really need is being held by others.

“I and my children hold each other every night while sleeping, but these children cannot do that,” Ario noted. “They are desperate for someone who would behave in the same way as I do for my kids.”

Ario started making calls to facilities across Kanagawa to make her idea become a reality.

She began her hug campaign alone at first. Her neighbors and their acquaintances gradually joined in, and it eventually grew into Gruun in 2011.

For several years, Ario traveled to care homes nationwide as the head of the group to meet with children and show them love and attention.

But she died in February 2015 from cancer at age 43. Her children currently live with relatives.

Registered members of Gruun are mainly women in their 40s. Their number had reached 1,000 within four years since its establishment.

Mitsuko Komoto, 64, who took over from Ario, said she learned about the group through the internet and became the first supporter in Okayama in 2012.

“The group’s birth mother passed away but helping one another in our own style will work,” said a determined Komoto.

While its members make periodic trips to children’s homes to give hugs, Komoto has embarked on full-fledged efforts to promote the foster parent system.

She calls for those interested to apply for a short-term adoption program to look after children for just a few days a month.

Since 2015, Komoto has temporarily cared for children by herself and now lives with a child who cannot stay with their biological parents.

“I serve like an old female relative,” said Komoto. “I believe telling children that I always care about them is a form of embrace in a broad sense.”

Gruun has also been working to strengthen cooperation with existing institutions.

Okayama city commissioned it to hold annual open lectures in the hopes of deepening people’s understanding of care homes, foster children and foster parents. Gruun also works in Nagoya with the social welfare council to find and develop new supporters.

Before her death, Ario left behind a message as the founder of the hug program.

“The two achievements--giving birth to two precious lives and producing Gruun--are proof of my living in this world,” Ario said. “No one can predict what will transpire tomorrow. So, today, you should kind-heartedly hold your loved ones and small babies who are hungry for affection.”

People from across Japan’s 47 prefectures have joined the movement to provide hugs for children. For more details about Gruun’s activities, visit its website at (https://www.gruun.org/).