Blue and yellow: Cities across Japan light up to support Ukraine

The Tokyo Metropolitan Government Building in Shinjuku Ward is bathed in blue and yellow, the colors of the Ukrainian national flag, to show solidarity with the people of Ukraine on Feb. 28. (Masahiro Hirano) 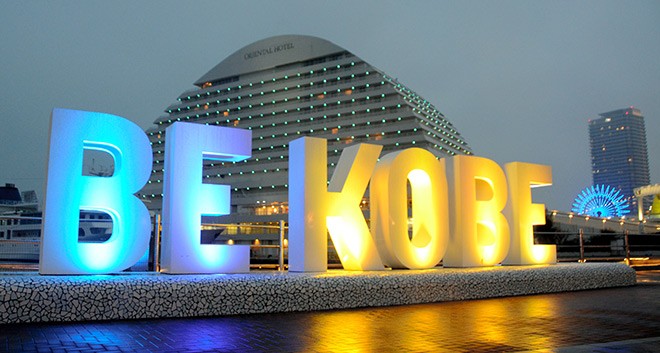 The “Be Kobe” monument in Meriken Park in Kobe’s Chuo Ward is illuminated in blue and yellow, the colors of the Ukrainian national flag, to show solidarity with the people of Ukraine on March 1. (Haruka Suzuki)

Japan is awash in a sea of blue and yellow as cities across the nation express their solidarity with Ukrainians by lighting up prominent monuments in the colors of the Ukrainian flag.

At the same time, local assembly members across Japan are condemning Russia’s brutal military invasion through resolutions and letters that express their outrage.

Kobe’s iconic Kobe Port Tower and “Be Kobe” monument were lit up in blue and yellow on the evening of March 1.

Earlier in the day, the assembly of the port city in Hyogo Prefecture unanimously voted to protest against Russia’s invasion of Ukraine.

In a resolution, the assembly said the Russian attack “is a serious infringement of sovereignty and a threat to the peace, order and security of the international society including Japan."

It urged the central government to “work in concert with the international community to respond to the crisis strictly and properly.”

The city government also announced that it will make an emergency donation of 10 million yen ($86,900) from the city’s discretionary reserve fund to UNICEF to help children in Ukraine.

“We want to support Ukrainians, even if only slightly,” said Kobe Mayor Kizo Hisamoto.

The city government said the lighting-up of its monuments is intended as a prayer for peace to return to Ukraine as soon as possible and will continue for the time being.

Such displays of solidarity and prayers for Ukraine have spread across Japan.

In the capital’s Shinjuku Ward, the Tokyo Metropolitan Government Building was illuminated in blue and yellow on the evening of Feb. 28.

Officials said it is a way for Tokyo to deeply show its concern about the tragedy that has befallen the people of Ukraine and express its solidarity with them.

In Kumamoto, an iconic castle has become a symbol of solidarity with Ukrainians.

On the evening of March 1, the larger keep tower of Kumamoto Castle was lit up in blue, while a smaller keep tower was illuminated in yellow.

The Kumamoto city government said it is an expression of mourning for the victims of the Russian invasion and a strong anti-war sentiment.

He said he had sent a letter of protest to the Embassy of the Russian Federation in Japan, addressed to President Vladimir Putin, asking the Russian leader to pull his troops from Ukraine and find a peaceful resolution.

The castle will be lit up from sunset to midnight every night until March 5.

The war in Ukraine has triggered strong opposition and indignation from places deeply scarred from the bitter fighting in World War II.

The Okinawa prefectural assembly on March 2 unanimously passed a resolution to condemn Russia’s invasion of Ukraine and urged Putin as well as the Russian ambassador to Japan to immediately cease fire.

The resolution cited the Battle of Okinawa in the late stages of the Pacific War and said, “People in Okinawa are still suffering from the wounds of the (battle)” and facing difficult issues caused by the war.

It called the Russian invasion an “unpardonable act of barbarism” and said the assembly “feels strong resentment.”

Before the vote, assembly members observed a moment of silence in honor of the victims of the Russian attacks on Ukrainian cities.

The day before, the Osaka prefectural assembly unanimously passed a resolution condemning Russia’s invasion of Ukraine.