Opposition rises against plans for casino resorts in 3 prefectures 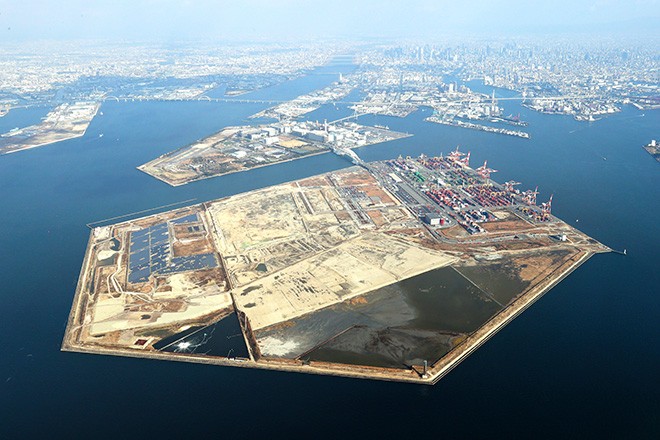 A casino-centered integrated resort is planned in the center background of the artificial Yumeshima island in Osaka’s Konohana Ward. The planned venue of the 2025 Osaka Kansai Expo extends from left to the foreground. (Takaharu Yagi)

Authorities in Osaka, Wakayama and Nagasaki prefectures are now racing against the clock to overcome a variety of challenges in their plans to host casino-centered integrated resorts (IR).

The local governments in western Japan have until April 28 to submit their final IR development plans to the central government after approval by their local assemblies.

However, opposition against the planned casinos has grown among local residents, and financial and other problems remain.

The Osaka prefectural and municipal governments have already drafted a plan to build an IR on the artificial Yumeshima island in the city.

“(The IR) will be an engine of sustainable economic growth for Osaka and the Kansai region,” Osaka Mayor Ichiro Matsui told a plenary session of the city assembly on Feb. 25. “We will work as one with the prefectural government to realize the plan at an early date by promoting citizens’ understanding and taking measures against gambling addiction.”

Matsui has said the IR plan won a public mandate when it was part of campaign platforms in mayoral, gubernatorial and other elections won by himself and his political allies, including Osaka Governor Hirofumi Yoshimura.

However, the Osaka city assembly has received about 130 casino-related petitions that are mostly skeptical of the project. Some demand the plan be dropped. Others call for a referendum on whether the area should host the resort.

The city assembly’s secretariat said the number of petitions is higher than those received when a referendum was held in 2020 on whether to administratively reorganize the prefectural capital of Osaka into a metropolis like Tokyo.

One sticking issue is the city government’s unprecedented decision to shoulder 79 billion yen ($687 million) at the request of the project consortium led by MGM Resorts International and Orix Corp., partly to cover costs to prevent soil liquefaction at the site on Yumeshima island.

Critics have also said the estimates for visitor numbers and revenues are based on ambiguous grounds, and that only optimistic projections have been released.

“IRs are key to Japan’s effort to be a leading tourism nation,” Prime Minister Fumio Kishida, also president of the Liberal Democratic Party, has said.

The LDP, however, is in the opposition at both the municipal and prefectural levels in Osaka.

The LDP’s local chapter is spearheading moves in the Osaka city assembly to question officials over problems with the IR development plan.

The LDP caucus in the assembly on Feb. 10 submitted a draft ordinance on holding a referendum on the IR plan. But Osaka Ishin no Kai and Komeito voted down the proposal.

The LDP has remained critical of the plan, saying local authorities are under the thumb of the prospective resort operator, and the costs covered by the city government could snowball further.

Nine civil advocacy groups on Feb. 10 submitted a joint petition with more than 71,000 signatures against the IR project to the prefectural and city governments.

Another group was founded on Feb. 20 to start a new petition to demand that the governor have an ordinance established on holding a referendum on the matter.

The Osaka prefectural and city governments have held all four scheduled public hearings to hear residents’ views under the Law on Development of Specified Integrated Resort Districts.

Authorities, however, canceled four of 11 scheduled meetings on explaining the IR project to residents, citing the increase in COVID-19 cases.

The Osaka Bar Association called for a withdrawal of the IR development plan in a president’s statement released on Feb. 25. “The process of consensus-building among residents through appropriate information disclosure has been slighted,” the statement said.

The Osaka prefectural and municipal governments concluded a basic agreement with the project consortium on Feb. 15.

A banking syndicate led by two megabanks, MUFG Bank and Sumitomo Mitsui Banking Corp., will provide 51 percent of the initial investment of 1.08 trillion yen in loans.

The remaining 49 percent will be financed by investments by MGM Resorts International, Orix and 20 other companies including Panasonic Corp. and Kansai Electric Power Co.

In Wakayama and Nagasaki prefectures, the prospective operators appear to be struggling to secure lenders and investors for the IR projects.

Wakayama Prefecture had planned to release a draft IR development plan in November, but a special committee of the prefectural assembly called for a resubmission, citing uncertainties in the fund-raising program.

However, no overall picture of prospective investors and lenders was presented at a Feb. 7 meeting of the special committee.

Officials from the prefectural government and Canadian investment company Clairvest Group told the committee that 70 percent of the initial investment of 470 billion yen will be financed by loans and 30 percent will be covered by investments.

While Credit Suisse Group will lead a syndicate of banks, no other financial institutions were identified.

But of the 10 or so investors expected to put up the remainder, only Nishimatsu Construction Co. was named.

Committee members criticized the plan, saying it provides no convincing information to the prefecture’s residents.

But the committee gave the green light to proceed to the next stage, such as soliciting public opinions and holding hearings on the draft IR plan.

It cited the approaching deadline for submitting the IR plan to the central government.

Some residents raised concerns about funding at the prefectural government’s explanatory meetings held between Feb. 28 and March 6.

The resort is planned at Wakayama Marina City in the prefectural capital of Wakayama.

A civil advocacy group in December demanded that the mayor have an ordinance established on holding a referendum after collecting 20,000 signatures, but the city assembly voted down the proposal.

Group officials said they would continue voicing their views at public hearing sessions and on other occasions.

The Nagasaki prefectural government is preparing a draft plan to build a casino resort in the Huis Ten Bosch theme park in the city of Sasebo.

However, officials from the prefectural government and the Japanese arm of Casino Austria International failed to announce any lenders or investors at a meeting with prefectural assembly members on March 10.

According to the plan, the project calls for 438.3 billion yen in initial investment, 60 percent of which will be covered by loans and 40 percent by investments.

Kengo Oishi, who was elected governor of Nagasaki Prefecture on Feb. 20 and took office on March 2, has maintained the IR is necessary for revitalizing the regional economy.

Oishi plans to hold public hearings, receive the prefectural assembly’s approval for the draft IR development plan, and complete other steps by the end of March.

Some said the time frame is too short for publicizing the draft plan and having it discussed thoroughly.

“Many are concerned not only about the funding capacity of the resort operator but also about the plan to build the resort in the Huis Ten Bosch, a popular destination of school excursions,” said Koji Araki, secretary-general of “Stop the Casino! Nagasaki Prefecture residents’ network,” an advocacy group. “We call for ample explanations.”

(This article was written by Ai Asanuma, Noriki Nishioka and Chifumi Shinya.)