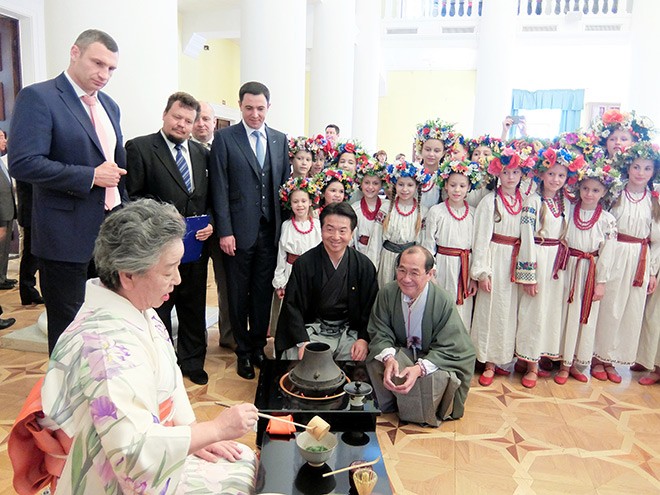 A tea ceremony is held in Kyiv when Kyoto Mayor Daisaku Kadokawa visited the sister city in June 2017. (Provided by Kyoto city government)

KYOTO—Over the past 51 years, residents in Kyiv have supported Kyoto and Japanese nationals through thick and thin under their sister-city relations.

Now, officials and residents in Kyoto say they are doing whatever they can to support people in the Ukrainian capital as it faces its worst crisis since World War II.

The Russian invasion has brought heartbreak to those involved in relations between the two ancient capitals, which were set to forge even deeper ties through mutual visits and cultural exchange programs.

Sigal Olena, 45, a Ukrainian national working at the Kyoto City International Foundation, lived in Kyiv until she moved to Japan at the age of 22.

She described Kyiv as an ancient city with an abundance of lush greenery and world heritage.

“It bears similarities to Kyoto,” Olena said. “I have been proud of my hometown.”

She now fears for the safety of her friends and relatives in Kyiv, including her aunt and uncle with whom she has been communicating daily via email.

“They don’t have anywhere to go except for their home because there is no evacuation center nearby. They said they can’t sleep at night because of the wails of the siren,” she said.

Olena’s native language is Ukrainian, but she has taught the Russian language and cooking to Japanese.

Ukraine and Russia used to have a close affinity, she said. And although relations between the two countries worsened with each passing year, Olena was surprised by Russia’s attack.

On a social networking site, Olena saw her friend in Kyiv sending his wife and children to a suburb. He said he would stay to become a soldier and defend the city against the invaders.

“It is heartbreaking that he has to go to battle,” she said.

Olena said she wants the world to “witness what is happening in Ukraine and listen to the voices of people in Ukraine.”

As of the end of 2021, 27 Ukrainian nationals lived in Kyoto, including Olena.

The foundation on March 1 stated a charity drive to help Ukraine.

MEMORIES OF JAPANESE GARDEN IN KYIV

Sano was involved in building a Japanese garden called Kyoto Park with a stone pagoda in Kyiv in 1981. It was a commissioned work as part of sister-city exchanges.

Sano, a gardener, stayed in Kyiv for about three weeks with Kyoto city employees. They sweated together with around 20 Ukrainian craftspeople, moving rocks and soil and measuring the size and tilt of the stones.

An interpreter was present but was not needed, Sano said.

“We were all craftspeople,” he recalled. “We knew what we were doing, and we could relate to each other without speaking.”

He still remembers the way the Ukrainian gardeners worked hard and quietly.

Sano also fell in love with the streetscape of Kyiv and the large river running through the city dotted with archeological sites.

He said he felt the presence of the long history and nature in the city.

“It reminded me of Kyoto. Time went by at a slow pace there,” he said.

He has not returned to Kyiv. When he reads or watches news about Kyiv these days, Sano pulls out pictures he took four decades ago and wonders, “What is happening to the city now?”

“People must be going through uneasy days,” he said.

The more he learns about the crisis, the more disturbed he feels.

“Bombs have been dropped on that laid-back city. That thought terrorizes me,” he said. “You should never choose war to solve a problem.”

HEART AND SOUL SUPPORT AFTER 3/11

To mark the 40th anniversary, Kadokawa visited Kyiv in September 2011, about half a year after the disaster in the Tohoku region.

The visit also coincided with the 25th anniversary of the Chernobyl nuclear disaster in Ukraine.

People in Kyiv did not see what was happening in Fukushima Prefecture as someone else’s problem, Kadokawa said.

They showed support with their heart and soul by holding a charity concert at Ukraine’s largest theater, where people from Kyoto had performed ballet and Japanese classical dance, Kadokawa said.

At night, people gathered in a square in Kyiv to release paper balloons as a requiem for victims of the 2011 disaster.

Kadokawa returned to Kyiv in 2017.

“We have deepened exchanges through support for rebuilding disaster-hit areas and promoting grass-roots peace movements and people’s lives,” he said.

Petro Poroshenko, then the Ukrainian president, visited Kyoto in 2016, followed by a visit by Kyiv Mayor Vitali Klitschko.

After touring Nijo-jo castle and other sites in Kyoto, Klitschko told Kadokawa that he wanted to strengthen Kyiv’s potential as a city in terms of economy and other means through exchanges with Kyoto, the Kyoto mayor said.

The two cities were planning to take steps to further tighten their ties when Russia invaded Ukraine.

Kadokawa immediately issued a statement on Feb. 24, asking Moscow to end the invasion in a peaceful manner.

“I am gravely concerned and deeply troubled by (the crisis),” he said at the beginning of a city assembly meeting on Feb. 28.

“It is foreign diplomacy that achieves peace at the national level,” the mayor said. “But at the city and citizen level, it is important to build a society that mutually accepts other cultures and diversity through exchanges.

“We will take action for things as we can, hoping that Kyiv regains peace as early as possible.”

In front of a monument commemorating the sister-city relationship, the Kyoto municipal government on March 2 set up a stand where residents can offer flowers and prayers for peace in Ukraine.

The monument was a gift from Kyiv.

Naoya Kishida, a 49-year-old hairstylist who lives in Kyoto’s Sakyo Ward, bought cherry blossoms at a nearby flower shop and offered them at the stand.

“I wish for a warm spring to come to the Ukrainian people,” he said about his choice of cherry flowers.

“Praying for peace is the only thing I can do right now,” Kishida said. “I hope my prayers are answered.”

Kadokawa also visited the make-shift altar to give a flower tribute.

“Many invaluable lives are being lost in Ukraine at this moment,” the mayor said, pledging to continue supporting the sister city until peace and safety return.

The altar will remain there until March 31.

The city government has started a donation drive to support Ukraine that is also expected to continue until March 31.

(This article was written by Satoko Onuki, Shun Yoshimura and Koshin Mukai.)