Study: Bugs use different defense tactics depending on predator type 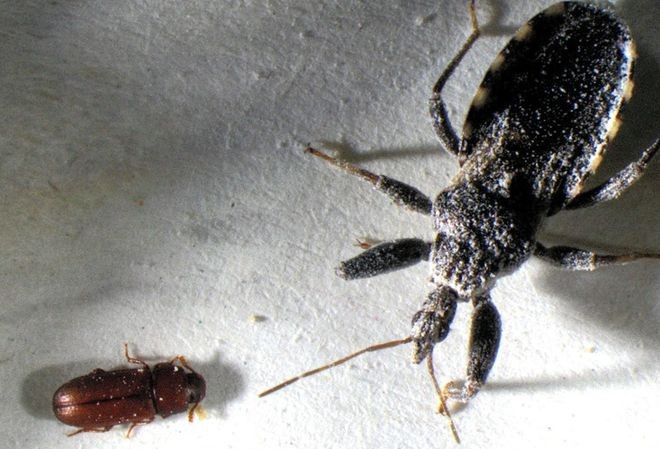 Insects can take different defensive measures depending on the predator, a discovery that goes against the traditional notion that bugs use the same tactics to survive all attacks, a research team said.

The team headed by Takahisa Miyatake, a biology professor at Okayama University, has been studying how insects try to avoid being killed, such as playing dead, not moving or fleeing.

Miyatake and his colleagues used red flour beetles, each measuring less than 5 millimeters long, to study their reactions to different predators.

Red flour beetles, which can damage stored grain, are easy to keep and be used in experiments.

A past study revealed that the beetle feigns death by lying on its back with legs pulled in tightly when a jumping spider, its natural enemy, appears.

The team tested the beetle’s response to another predator, a 10-mm-long stinkbug variety called Amphibolus venator.

Five red flour beetles and one stinkbug were put on the same laboratory dish for observation. Dozens of bugs were tested in this manner during the multiple rounds of the experiment.

The results showed the beetle did not play dead with the stinkbug’s presence. Instead, the potential prey froze all of its movements.

Although some of the beetles were eaten, they never played dead.

According to the widely accepted theory on insects’ behavioral patterns against predators, the creatures first freeze at the sight of an enemy and feign death as a last-ditch effort if the attack continues.

Miyatake described his team’s finding as “one overturning the established idea.”

The red flour beetle apparently picked a survival strategy after taking into account the kind of predator it faced, he said.

Such decisions are possibly determined by the different stimuli caused by the different enemies, according to the scientists. The spider actively jumps to find prey, while the stinkbug species waits patiently for potential food to emerge.

The researchers are now trying to pinpoint the stimuli and mechanisms behind the different action patterns of the beetle.

“We can return to the roots of science and gain beneficial insights by thoroughly observing acts and ecologies with increasingly advanced microscopic research methods, including genome analysis,” Miyatake said. “What is important is finding interesting things and studying them by yourself.”