Clocks vanishing from JR stations due to demands on time 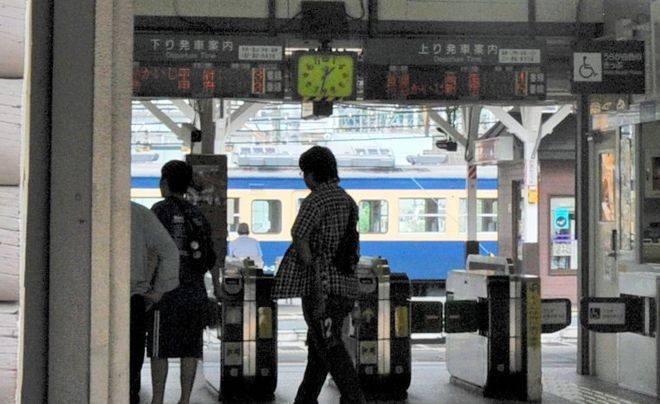 Japan’s rail network famously works with clock-like precision, but finding a clock to check timetables at many stations is becoming increasingly difficult.

Company officials said station clocks no longer fulfill an essential role as passengers tend to rely on their cellphones for time checks.

JR East removed clocks from all its stations in Yamanashi Prefecture, central Japan, except for Kofu, the prefectural capital.

The move triggered a local uproar, with many passengers decrying the absence of traditional ceiling-mounted clocks as “inconvenient.”

A local municipality has called on JR East to set the clock back, as it were, by “returning to the situation that it formerly was.”

Otsuki Station along the JR Chuo Line used to boast a square-shaped clock near its ticket gate. Though the one beside electronic bulletin boards displaying train information boasted higher accuracy than traditional clocks, it was removed last November.

A train user said the clock had always proved useful when “I was in a hurry and needed to quickly check how soon a train would leave.”

Passengers, for the most part, accept that times have changed and they no longer can take station clocks “for granted” and must rely instead on their own timepieces and cellphones for last-minute checks.

Otsuki city authorities in January surveyed the situation at stations in the municipality and confirmed that all six JR stations had been stripped of clocks.

The Otsuki government requested the rail operator to reinstall them. A resolution to this effect was passed by the municipal assembly on Feb. 25.

On March 1, Otsuki city authorities contacted the prefectural government to up pressure on JR to reinstall the clocks. It is also considering working with other cities, towns and villages to pile on more pressure.

“Trains are supposed to operate punctually,” said Takumi Amano, head of Otsuki city’s general affairs department. “As they represent a form of public transportation used also by children and elderly individuals, clocks must be regarded as an indispensable part of the operation.”

According to the Hachioji branch of JR East, clocks were removed at 22 stations in Yamanashi Prefecture by the end of February. The company operates 28 stations in the prefecture, but five had no clocks in the first place. Kofu Station, because of its size, retained its clocks.

JR East intends to strip 500 stations nationwide of their clocks over the course of 10 years under plans started last fall, according to a company representative.

The official cited degradation of equipment, maintenance costs and widespread use of cellphones and smartphones for the switch. Reducing clock numbers is projected to shave 300 million yen ($2.59 million) off annual operating costs.

“We ask for passengers’ understanding, realizing that the policy may cause some inconvenience,” the JR East representative said. “But it is necessary for sustainable operations of rail lines.”

“We do not have high-performance clocks like those of JR at our stations, so maintenance costs are kept low,” said a Fuji Kyuko official. “Clocks serve as symbols at some stations, and there are no plans as of now to get rid of them.”