Radioactive waste stuck at 830 sites with nowhere to go 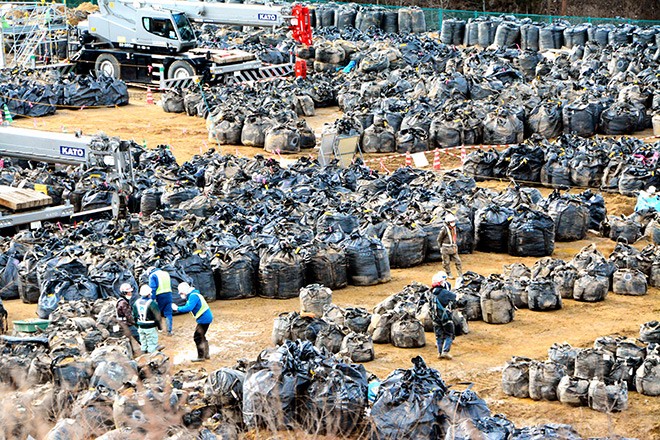 A temporary storage site for contaminated soil resulting from the 2011 Fukushima nuclear disaster. The bags of radioactive waste are due to be shipped to an interim storage facility. The photo was taken in February. (Yukiko Sakamoto)

Vast quantities of topsoil collected during decontamination work after the 2011 Fukushima nuclear disaster are stuck in limbo at hundreds of sites with no early prospect of being shipped to interim storage facilities ahead of a government-set deadline.

The soil is being kept “temporarily” at 830 locations in six municipalities in Fukushima Prefecture.

Significant delays are expected in shipping the soil even though the government had planned to complete the operation by the end of this month as required by law.

The volume of contaminated soil and other radioactive materials awaiting shipment totals 8,460 cubic meters, which is the equivalent of 130 trucks each weighing 10 tons.

A key reason for the delay is that new houses were built on land where contaminated soil was buried as negotiations over storage sites in many communities dragged on. This accounts for about 50 percent of the cases cited by municipalities in a survey by the prefectural government last September.

About 30 percent of cases resulted from the refusal of landowners to bear the transportation costs, while about 10 percent are due to an inability by the authorities to contact the landowners.

As time passed, ownership of land tracts changed due to sales transactions and inheritance issues. Some landowners had no idea their plots contained radioactive material.

Tokyo Electric Power Co., operator of the crippled Fukushima No. 1 nuclear plant, shouldered the cost of the cleanup.

But the owners of the homes in question are obliged to pick up the tab for relocating so that the buried waste can be removed, according to the Environment Ministry.

Officials in the six local governments said the radiation levels at the 830 sites pose no health hazard as the readings were below 0.23 microsieverts per hour, the threshold for the need to decontaminate.

Decontamination work in affected communities in the prefecture wound up by March 2018.

The waste from those operations is required by law to be shipped outside the prefecture for final disposal by 2045.

Until then, the interim storage facility is all that is available.

The central government and Fukushima prefectural authorities have been locked in talks for the past 18 months on what to do with contaminated soil that cannot be moved any time soon.

The Environment Ministry called on local governments to continue managing contaminated soil that is deemed difficult to move in line with a directive issued in December 2020 that made it their responsibility.

The special measures law concerning the handling of radioactive materials stipulates that municipalities, which oversaw the cleanup, are responsible for managing the contaminated materials.

But the ministry’s directive upset local governments, which operate with limited manpower and funds.

Officials with the Fukushima and Sukagawa city governments held informal talks with the ministry last October to request that the central government collect, manage and transport the contaminated soil.

“We cannot manage these sites forever as the number of our employees is dwindling,” one official said.

Kencho Kawatsu, who chairs a committee with oversight for the environmental safety of the interim storage facility, underlined the need for the central and Fukushima prefectural governments to share in the responsibility for managing the temporary storage sites with municipalities.

“If the radioactive soil is scattered, it could fuel rumors that prove harmful to Fukushima municipalities,” said Kawatsu, a guest professor of environmental policy and radiation science at Fukushima University.

He suggested centralizing data on the issue to prevent such an occurrence.