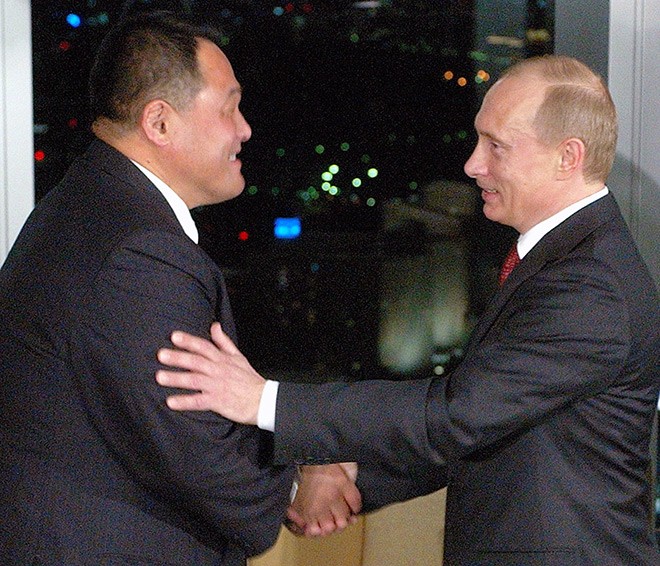 The Russian invasion of Ukraine has Japan’s judo authorities grappling with calls from the public to take Russian President Vladimir Putin to the mat and strip him of his high-ranking belt.

Putin, 69, has long held a love for judo, in which he is a well-known holder of a black belt.

The prestigious Kodokan Judo Institute in Tokyo, the worldwide headquarters of the sport, awarded Putin the sixth dan of “Kodokan judo” when he visited Japan in 2000.

But since Russia launched its invasion of Ukraine, Kodokan has received phone calls demanding it strip Putin of his sixth-dan rank, which is higher than a black belt.

Putin is an admirer of Yasuhiro Yamashita, a renowned judoka who won a gold medal at the 1984 Los Angeles Olympics and currently serves as the chairman of the Japanese Olympic Committee (JOC), as well as head of the All Japan Judo Federation.

The public’s demand for the judo community to take action against Putin has baffled officials, including Yamashita, 64, who said, “I am not as good friends with (Putin) as everyone thinks.”

Kodokan officials explained why it awarded Putin such a prestigious honor: “Because we confirmed Putin’s ability and other things with an instructor who recommended Putin to get promoted to the (sixth) rank, and also because he has continued to be trained.”

The officials said it was a special case.

Putin added, “Judoka across the globe must feel that way, because Kodokan is a precious home for judoka.”

Japanese judo officials were impressed by Putin when he said, “It is wonderful that judo has spread around the world. But what is more important and worthwhile is the fact that Japanese culture and Japanese spirit are spreading across the entire globe through judo.”

Kodokan said a dan is awarded for a practitioner’s ability and accomplishments at the time the decision is made.

“Even if a person commits a crime, for instance, a dan rank awarded to the person will not be stripped,” a person related to Kodokan said.

As an example, Kodokan did not remove the dan rank from Chizuo Matsumoto, a.k.a. Shoko Asahara, who led the religious cult Aum Shinrikyo and later was executed in 2018 for the 1995 sarin gas attack on the Tokyo subway system and other crimes.

Kodokan was established by Jigoro Kano to advocate “making good use of energy” and “co-prosperity of oneself and others,” and judoka there believe judo is a way to discipline one’s physical, technical and spiritual aspects.

The person said, “It seems the spirit of judo did not reach (Putin) and could not change him.”

Yamashita, an executive board member of the IJF, said, “I made it clear to the (IJF) that I think it is undesirable for President Putin to be in the honorary president position.”

Yamashita has maintained a close relationship with Putin for more than 20 years.

When Putin visited Japan in 2005, Yamashita attended a drinking party with him.

He also served as a liaison for the Japanese government to send its message to Putin at the time.

In speaking about Putin, Yamashita lowered his voice and said the Russian president “used to love judo.”

Before the Beijing Games opened, suspicions that Russia would use force against Ukraine were growing.

But Yamashita said the invasion was “totally unexpected” for him.

“Little did I imagine that we would find ourselves in this disastrous situation,” he said about the Russian attack of Ukraine.

Asked by a reporter if Putin’s military action is “out of line for a judoka,” Yamashita looked pained and said, “You know the answer better than anyone.”

Kaori Yamaguchi, an Olympic judo medalist and former JOC board member who holds the Kodokan Judo seventh dan, said, “The teaching of Jigoro Kano sensei is, ‘Once you take on power, use it to do good for the world.”

In light of the teaching, “(Putin’s) use of power in this way is impermissible, a definite no-no,” she said. “Putin is not a judoka.”

Yamaguchi is also concerned that the situation can give the world a false impression of judo. She said the judo community needs to send the message that what Putin is doing goes against judo’s teaching.