Quad leaders agree Ukraine experience should not be allowed in Indo-Pacific--Japan, Australia 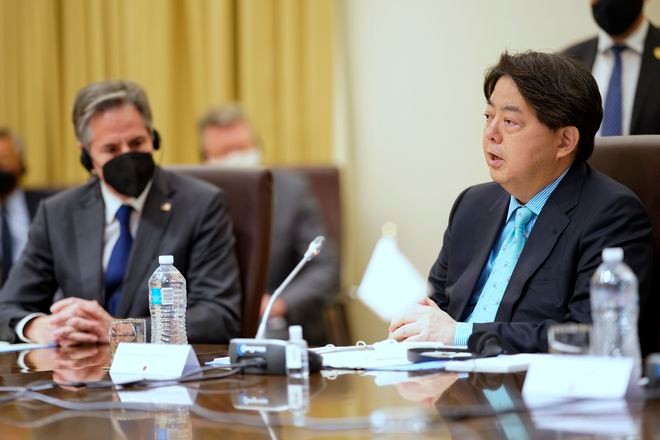 Leaders of the Quad grouping of countries - the United States, India, Australia and Japan - agreed on Thursday that what is happening to Ukraine should not be allowed to happen in the Indo-Pacific, the prime ministers of Japan and Australia said.

A virtual meeting of the four-country grouping was held at a time of increased concern about Taiwan, a self-ruled island claimed by China that has stepped up its alert level since Russia’s invasion of Ukraine, wary of Beijing taking advantage of a distracted West to move against it.

“We’ve agreed that unilateral changes to the status quo with force like this should not be allowed in the Indo-Pacific region,” Japanese Prime Minister Fumio Kishida said, referring to Russia’s invasion.

“We cannot allow what is happening in Ukraine now to ever happen in the Indo-Pacific,” Morrison said in a statement after the meeting.

“We are resolute in our commitment to a free and open Indo-Pacific region where smaller states do not need to live in fear of more powerful ones,” he added.

A joint Quad statement said the leaders met to “reaffirm their commitment to a free and open Indo-Pacific, in which the sovereignty and territorial integrity of all states is respected and countries are free from military, economic, and political coercion.”

The leaders, whose call followed a meeting of their foreign ministers in Australia last month, also “reaffirmed their dedication to the Quad as a mechanism to promote regional stability and prosperity.”

The statement, which added that the leaders agreed to meet in person in Tokyo “in the coming months,” made no specific mention of Taiwan, but said the leaders discussed the conflict and humanitarian crisis in Ukraine.

“They agreed to stand up a new humanitarian assistance and disaster relief mechanism which will enable the Quad to meet future humanitarian challenges in the Indo-Pacific and provide a channel for communication as they each address and respond to the crisis in Ukraine,” it said.

Biden tweeted that the meeting with the Quad leaders covered “our commitment to sovereignty and territorial integrity around the world, including in the Indo-Pacific.”

Taiwan’s representative office in Washington said it welcomed the Quad’s commitment to a free and open Indo-Pacific. “Taiwan will continue to work with all peace-loving partners in the region for prosperity and stability,” it said.

Modi “underlined that the Quad must remain focused on its core objective of promoting peace, stability and prosperity in the Indo-Pacific region,” his office said.

It said developments in Ukraine were discussed, including its humanitarian implications, and Modi “emphasized the need to return to a path of dialogue and diplomacy.”

Washington sees the Quad and its growing relations with India as essential to its efforts to push back against China, but it is in a delicate balancing act with New Delhi, given the latter’s long-standing ties with Russia.

Of the Quad countries, only India has not condemned Russia’s invasion of Ukraine. Russia is the main supplier of arms to the Indian military, and India faces the possibility of U.S. sanctions for its purchase of Russia’s S-400 air defense system.

Analysts say any moves by U.S. Russia hawks to impose sanctions on India for working with Moscow could set back Quad cooperation.

Donald Lu, U.S. assistant secretary of state for South Asia, told a Senate subcommittee hearing on Wednesday that Washington had been fighting a “pitched battle” with India in diplomatic channels to urge it to take a clear position opposed to Russian actions in Ukraine.

He also said it was looking “very closely” at whether to the apply sanctions on India over its Russian arms deals.