The dog tag of Makoto Nishi, a member of the escort unit for transport ships who was killed in the Battle of Okinawa, is returned to his bereaved family in February in Hirao, Yamaguchi Prefecture. (Video by Risako Miyake) 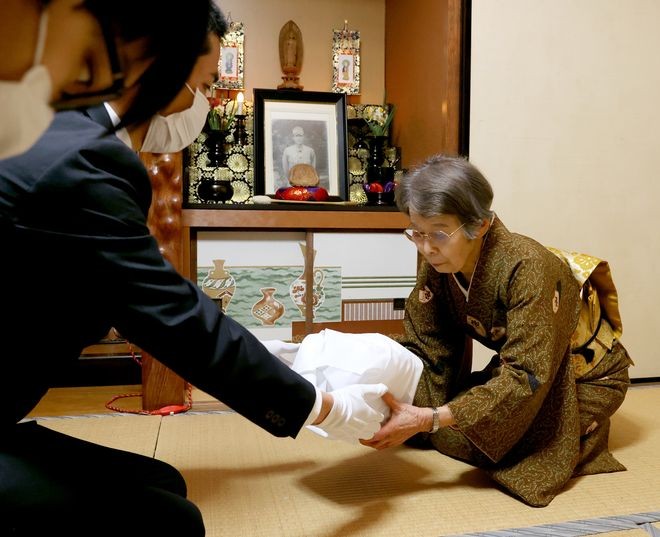 HIRAO, Yamaguchi Prefecture--Hatsuko Inoue has no memories of her father but was overjoyed when a rare personal belonging of his was presented to her in February, 77 years after his death.

The dog tag of Makoto Nishi, who was killed in the 1945 Battle of Okinawa, was returned to his bereaved family here.

“He has finally come back,” said Inoue, 78, Nishi’s eldest daughter. “My mother would shed tears of delight if she was here.”

The dog tag was unearthed in 1995 in Japan’s southernmost prefecture. No skeletal remains of the serviceman from Yamaguchi Prefecture have been discovered so far.

Measuring 4.5 centimeters by 3.3 cm, the oval metallic tag was examined by Sadao Okamoto, 69, a professor emeritus at the Hiroshima University of Economics, who has been studying war ruins in Okinawa for many years.

It took nearly three decades to determine that the tag belonged to Nishi, who hailed from what is now Hirao and was killed at age 32.

Okamoto and his students visited Inoue in Hirao on Feb. 25, the day marking Nishi’s 109th birthday.

Clad in a kimono of her mother, who died while waiting for her husband to return home, Inoue received the dog tag with both her hands.

Inoue, who was 1 year old when World War II ended, said her mother told her that they went to Hiroshima, which was home to the Imperial Army’s vessel headquarters, in the winter before the war’s end.

Her father was dispatched to Okinawa Prefecture and was never heard from again.

His dog tag was found by Isamu Kuniyoshi in a dugout in Urasoe’s Maeda district in the central part of Okinawa, one of the bloodiest combat zones in the 1945 battle.

But the tag did not bear the holder’s name. Instead, it was inscribed with a soldier’s service number 61 and words referring to the No. 2 regiment of vessel artillerymen of the army.

The regiment was an escort unit for transport ships and belonged to the vessel headquarters.

Kuniyoshi has long been involved in collecting remains of those killed in the conflict. More than 200,000 soldiers and civilians died in the battle.

A volunteer who was helping Kuniyoshi learned that a group of bereaved families of members of the transport ships escort unit had erected a monument in Hiroshima Prefecture. Vessel artillerymen, including Nishi, were members of the escort unit.

The dog tag was sent to the family group through Okamoto’s mediation in August last year. Okamoto then started studying historical documents and other sources to identify the tag’s owner.

He found the tag containing a phrase representing the No. 1 surveillance team. Records show that three of the four team members killed in the Battle of Okinawa died in the southern area of the main Okinawa island in June 1945. The other member, Nishi, was simply described as “having deceased on May 28 on the main island.”

Okamoto concluded the tag discovered in central Okinawa was Nishi’s.

Inoue said she had long thought that no personal belongings of her father would be uncovered.

“In the end, I found my father, who I heard cared for me very much,” she said.