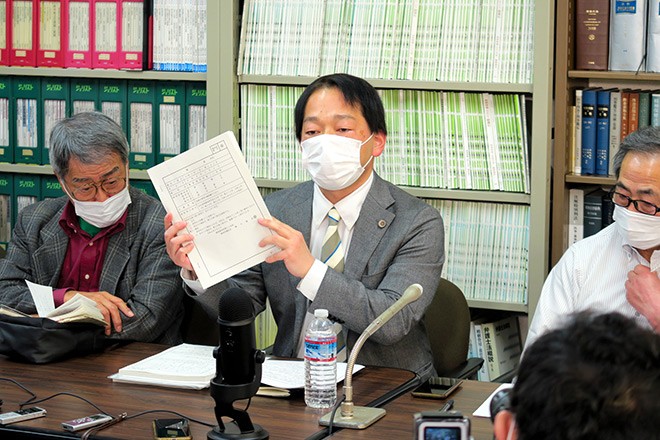 Izutaro Managi, a lawyer for the plaintiffs, holds a copy of the Supreme Court ruling at a March 4 news conference. (Noriyoshi Ohtsuki)

The Supreme Court settled the issue of compensation for around 3,700 people forced to evacuate from their homes due to the triple meltdown at the Fukushima No. 1 nuclear power plant in 2011 by ordering Tokyo Electric Power Co., operator of the stricken facility, to pay about 1.4 billion yen ($12.2 million) in damages.

The next item before the Supreme Court is to decide whether the government should also be held liable for shouldering the compensation burden.

The top court’s decision dated March 2 and made by its Second Petty Bench means the issue of TEPCO’s responsibility is finalized in three separate rulings.

High courts increased the compensation amount ordered for TEPCO above the standard level set by the government.

But lawyers for the plaintiffs called on the government to revise its compensation standard on grounds the amounts would differ widely between those who were part of the lawsuits and other evacuees. They also cited different sums laid out in the three high court rulings.

For example, the Tokyo High Court in its February 2021 ruling awarded a total of about 280 million yen in compensation to 43 plaintiffs who initially filed a lawsuit at the Chiba District Court.

Another Tokyo High Court ruling in January 2021 awarded a total of about 120 million yen to 90 plaintiffs who had evacuated to Gunma Prefecture.

Izutaro Managi, a lawyer for the plaintiffs, called at a March 4 news conference for the government to “aggressively and expediently revise its compensation standards based on the latest Supreme Court ruling.”

However, in January, an advisory panel to the science ministry which decides on the standards said there was no need for a revision.

A ministry official said there were no plans to call an emergency meeting of the panel following the Supreme Court ruling.

The top court’s ruling is the first regarding 30 or so class action lawsuits filed in various courts by evacuees.

The main issue related to government responsibility is the credibility of a long-term evaluation report, prepared by the government’s Headquarters for Earthquake Research Promotion in 2002.

(This article was compiled from reports by Shunsuke Abe and Senior Staff Writer Noriyoshi Ohtsuki.)