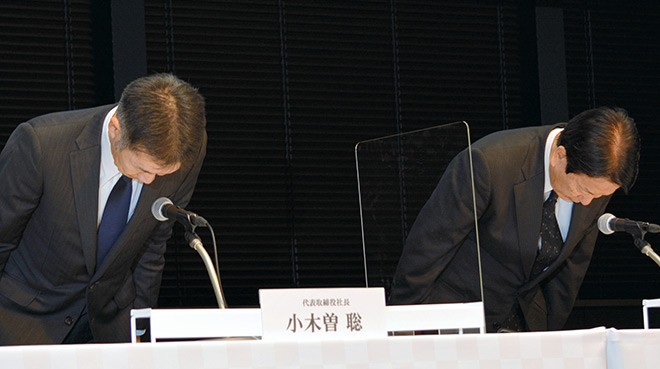 Leading truck maker Hino Motors Ltd. admitted to falsifying the results of tests for exhaust emissions and fuel economy of three types of engines over a number of years.

It became a subsidiary of automaker giant Toyota Motor Corp. in 2001 and sells trucks and buses in about 90 countries.

The company said questionable engines of about 110,000 vehicles had been sold and announced it was suspending sales of vehicles with deficient engines.

The transport ministry is investigating the matter because company officials deliberately falsified results knowing that the engines would not meet industry standards.

In one instance of testing for durability of equipment in line with exhaust emissions, the muffler was replaced during the test.

Chairman Yoshio Shimo acknowledged that its corporate responsibility for the matter was extremely grave, while the company’s president, Satoshi Ogiso, said it appeared data was deliberately falsified because workers handling the test knew the function standards were below par.

The company will set up an investigative committee to pin down responsibility for the misconduct.

It offered assurances that the falsification did not affect driving performance and safety of the vehicles.

Data was tampered with after the transport ministry in 2016 asked the nation’s major automakers to review their testing procedures following a scandal concerning Mitsubishi Motors Corp. over faked fuel economy figures for its vehicles. At that time, Hino Motors found nothing wrong with its methods.

But problems arose in 2018 over certification procedures for engines fitted to vehicles for export to the North American market.

Company officials decided to look into domestic testing procedures and uncovered the latest set of problems.

Its management explained that oversight for testing may have been lax because the section that handled engine development carried out the testing.

The transport ministry said the vehicles sold with deficient engines could face a recall or have their safety certification retracted.

(This article was compiled from reports by Junichi Kamiyama, Naoyuki Fukuda, Kohei Kondo and Masanori Isobe.)