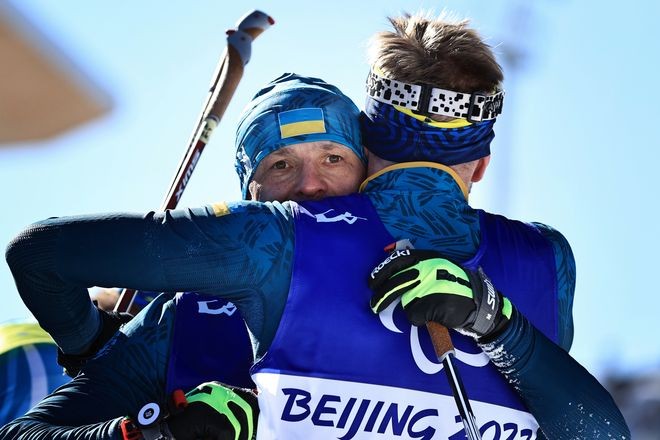 YANQING, China--Ukraine's athletes put a difficult week behind them as they clinched seven medals including three golds in biathlon to move to the top of the medal table on an emotional first day at the Beijing Winter Paralympics on Saturday.

The 20-member Ukrainian contingent almost didn't make it to the Chinese capital after Russia invaded their country just over a week ago, and Saturday's winners appealed for peace and dedicated their medals to people back home.

Grygorii Vovchynskyi, who claimed gold in the men's sprint standing event over Germany's Marco Maier at the Zhangjiakou National Biathlon Centre, said it was difficult to focus on sport given the events back home, but he found a way to win.

"When war started in Ukraine, every day I was thinking about how I can help my people, my free country, my president, how I can support the team, how I can help," the 33-year-old told reporters.

"I tried thinking about the competition, but today it's difficult. (What's) more important is life. It's our people, our children."

Ukraine vaulted to the top of the medal table with a podium sweep in the men's sprint vision-impaired event.

Gold medallist Vitalii Lukianenko hailed the win and sent a message of solidarity to the residents of Kharkiv, which has been under constant bombardment by Russian troops.

"I'm really proud that we have the Ukrainian podiums today, because it's really important for our country... also, I want to say hello to all my relatives who are in Kharkiv now. Please be strong," said Lukianenko following his fifth Paralympic medal.

Russian and Belarusian athletes earlier this week were banned from the Games by the International Paralympic Committee over the full-scale invasion, for which Belarus has been a key staging area.

Oksana Shyshkova, the women's sprint champion in the visually-impaired category, added that medals were meaningless when seen in the context of people suffering and cities ravaged by war.

"I just want peace for Ukraine. I hope everything will be calm and peaceful because I worry a lot about the situation in Ukraine... medals mean nothing compared to the lives of relatives and people."