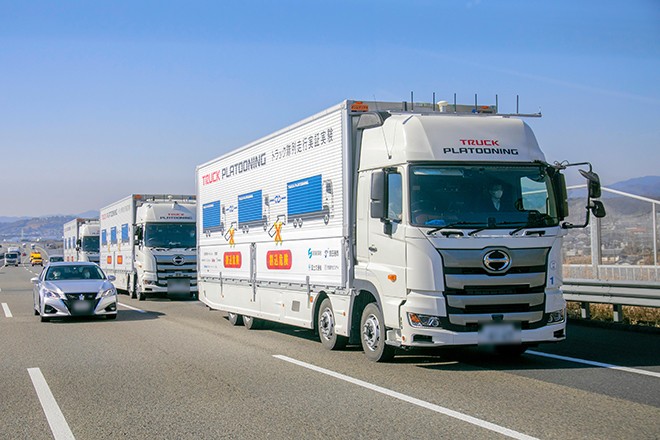 A scene from an experiment where a semi-trailer truck with a driver at the wheel leads two driverless trucks in a close convoy (Provided by Toyota Tsusho Corp.)

Shares of Japan’s Hino Motors Ltd. were on track for their biggest one-day fall in more than two decades on Monday, plunging more than 16 percent, after the Toyota Motor Corp.-unit truck maker said it had falsified emissions data.

It has suspended sales of three engine models as well as vehicles carrying them in Japan, the company said in a statement.

Hino said it is investigating the impact on its earnings.

The truck maker is the latest Japanese automaker found to have conducted improper tests.

In 2018, the government said Mazda Motor Corp., Suzuki Motor Corp. and Yamaha Motor Co. improperly tested vehicles for fuel economy and emissions. Subaru Corp. and Nissan were under scrutiny for the same reason the year before.

The accuracy of automakers emissions data was thrown into doubt in 2015 when Germany’s Volkswagen AG admitted to installing secret software in hundreds of thousands of U.S. diesel cars to cheat exhaust emissions tests, and that as many as 11 million vehicles could have similar software installed worldwide.