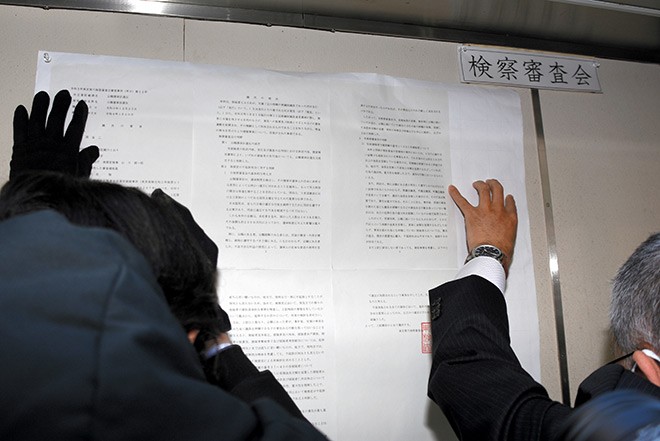 A prosecution inquest panel official puts a notice on Jan. 28 to announce its conclusion that 35 people, including Hiroshima prefectural assembly members, should be indicted on bribery charges in connection with Anri Kawai's campaign in the 2019 Upper House election. (Kazufumi Kaneko)

Prosecutors will indict 34 people, including local politicians in Hiroshima Prefecture, on bribery charges in connection with a vote-buying scandal that brought down two lawmakers, including a former Cabinet minister, sources said.

The Tokyo District Public Prosecutors Office in July 2021 said that charges of violating the Public Offices Election Law would not be brought against 100 individuals who received money from former Justice Minister Katsuyuki Kawai to help his wife, Anri, win a seat in the 2019 Upper House election.

In December 2021, however, a prosecution inquest panel concluded that 35 of those 100 individuals should be indicted because they accepted a larger amount of money in the vote-buying scandal, had failed to return the money they received, or refused to resign from their positions after the scandal came to light.

These 35 individuals included one who was mayor and 28 who were members of either the prefectural or municipal assemblies when they received the money. One was an aide to a former Diet member and four were staff members on Anri’s election campaign.

According to the sources, prosecutors will indict 34 of them, excluding one person who is ill.

Summary indictments will be brought against those who admitted to the charges after the inquest panel’s conclusion, the sources said. For the several people who still deny the allegations, prosecutors will formally indict them and seek public trials.

The 34 individuals will likely be indicted by mid-March, the sources said, adding that prosecutors will seek fines according to the amount of money they received.

Katsuyuki Kawai was sentenced to three years in prison and ordered to pay a 1.3 million yen fine after being convicted of breaking the same law by handing out about 28.71 million yen in total to 100 people in a Hiroshima constituency to help his wife win her first Diet seat. He was forced to give up his Lower House seat.

Anri was convicted of conspiring with her husband, given a suspended sentence and was forced to vacate the Upper House seat that she won in the election.

In December, the inquest panel also decided that the prosecutors’ decision not to indict 46 of the 100 cash-receiving individuals was “inappropriate,” requiring prosecutors to start fresh investigations into them.

Prosecutors are again expected to decide against indicting the 46 people, the sources said.

For the remaining 19 of the 100, the panel judged that it was appropriate not to bring charges against them.