Despite getting a heads-up, China now treads a fine line over Ukraine 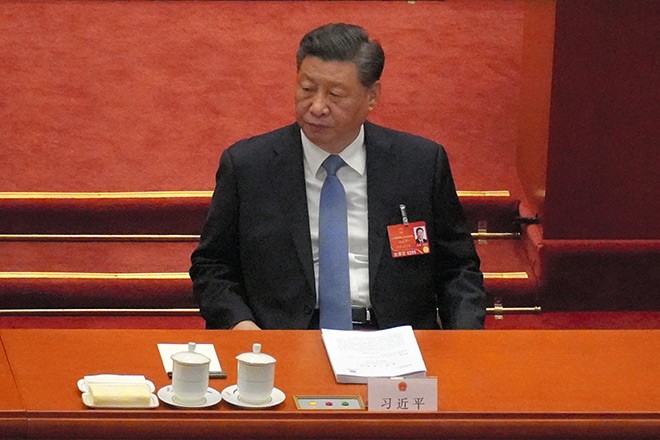 Chinese President Xi Jinping at a meeting of the National People’s Congress in Beijing on March 5, the first day of the annual session. (Masayuki Takada)

BEIJING--China was given early notice from Russia about its readiness to resort to military operations against Ukraine before its attack began last month, Chinese diplomatic authorities told The Asahi Shimbun.

But Beijing has nonetheless found itself in the hot seat since a full-scale invasion began on Feb. 24, as Russian President Vladimir Putin has even hinted that a nuclear strike against the West is on the table, drawing strong condemnation from around the world.

The Chinese government has valued Russia as a strategically important partner as the confrontation between Beijing and Washington is expected to continue.

According to experts, that puts it in a tricky spot. It runs the risk of overreach if it appears to be siding too much with Moscow over Ukraine, which could undermine China’s top leadership, as the international condemnation of Putin and Russia mounts by the day.

When Putin arrived in the Chinese capital on the afternoon of Feb. 4 for the Opening Ceremony of the Beijing Olympics, President Xi Jinping met with him at the Diaoyutai State Guesthouse prior to the event.

Up to that point, Xi had refrained from meeting with world leaders in person for about two years due to the coronavirus pandemic.

Putin was the first leader he met with to resume diplomacy through direct talks, and it marked their 38th summit.

At their meeting, Xi said China understands and supports Russia’s opposition to the expansion of NATO, a stance already announced by Chinese Foreign Minister Wang Yi during talks with his Russian counterpart, Sergey Lavrov, the day before, diplomatic sources said.

The sources, who are familiar with the details of the summit, declined to elaborate on what Putin said in the Asahi interview, but confirmed that the Russian leader discussed his view on the issue of Ukraine with Xi.

“The Chinese side became aware at that meeting that Putin was determined to not rule out military operations against Ukraine,” the sources said.

Beijing had put up a united front with Moscow against the enlargement of NATO while it also maintained close ties with Ukraine. It has remained neutral over the conflict between Russia and Ukraine.

Xi did not have a response for what Putin said at the Feb. 4 meeting, according to the sources.

At the time, what concerned the Chinese leader was possible fallout on the Winter Olympics, the sources said.

The New York Times reported this month that “senior Chinese officials told senior Russian officials in early February not to invade Ukraine before the end of the Winter Olympics in Beijing,” citing a Western intelligence report.

But the Chinese Foreign Ministry dismissed it as completely fake information.

The diplomatic sources in Beijing denied that Xi had made such a demand.

But they said Xi conveyed to Putin China’s position of placing the utmost importance on the success of the Games.

“We understand that Putin gave consideration to China’s position,” one of the Chinese diplomatic authorities said.

It is not clear why the Russian leader suggested that an assault on Ukraine was in the cards to his Chinese counterpart.

But it is easy to imagine that Putin expected China’s support and assistance to keep his country from being completely isolated from the global community, no matter how the Ukraine crisis played out.

Russia has been hit with wave after wave of global sanctions for its incursion into Ukraine, and observers are watching for whether it will turn to China for help in overcoming them.

China’s leadership has responded explicitly since Russia launched its invasion.

Hua Chunying, a spokeswoman with the Chinese Foreign Ministry, defended the Russian military action at a regular news conference on Feb. 24, held immediately after the launch of the full-scale invasion of Ukraine.

“Russia’s defense ministry said that its armed forces will not conduct missile, air or artillery strikes on cities,” she said. “The United States has been increasing tensions and hyping up war for some time.”

But reporters were persistent, asking 13 times whether Beijing would admit that Russia’s military actions amount to an invasion. Hua expressed displeasure with the repeated questions.

“Why are you obsessed with China’s condemnation?” she said.

Those questions, she pushed back, display a “certain stereotype of looking at China with preconceived notions and biases.”

Beijing remains unchanged in its position on Russia’s assault by not calling it an “invasion.”