Analysis: women across Japan far behind in gender equality 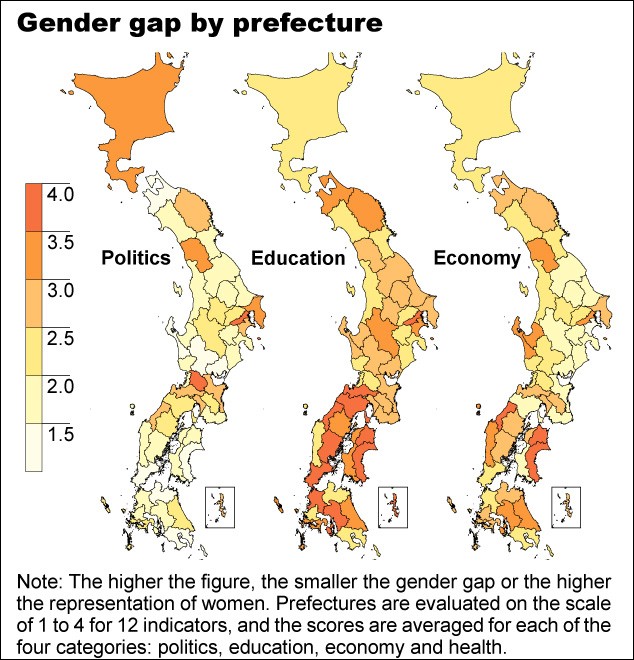 Women’s participation is still low across many of Japan's 47 prefectures, particularly in politics and management, while pay equality also continues lagging, according to a study by The Asahi Shimbun.

The results showed women were particularly underrepresented in politics nationwide, accounting for 10.6 percent of all prefectural assembly members. Yamanashi Prefecture had the lowest ratio in the country at 2.8 percent, or only one woman in its 36-member prefectural assembly.

Hokkaido topped the list of the number of years female governors have stayed in office over the past 50 years. Apart from the northernmost main island, only Tokyo and five prefectures have or had female governors.

In the economy category, Tokushima Prefecture had the nation’s highest ratio of women in managerial positions, but the figure remained at just 20.1 percent.

Gender gap in workforce participation was the smallest in Kochi Prefecture. But wages women receive for their work accounted for 73.4 percent of those paid to men who do the same job in the prefecture, slightly lower than the national average.

The World Economic Forum listed Japan 120th out of the 156 nations covered on its global gender equality ranking in 2021.

The analysis of government statistics covers 12 indicators for the four broad categories of politics, economy, education and health.

The Asahi Shimbun used the government’s open data to rank the level of women’s participation in each prefecture through such indicators as the workforce, wages paid for equal work, and representation in prefectural assemblies.

When crunching the numbers, reporters obtained guidance from Hiroshi Yoshida, a professor of economics of aging at Tohoku University, who compiles a gender parity index himself.

(This article was written by Azusa Ushio and Fumiko Kuribayashi.)