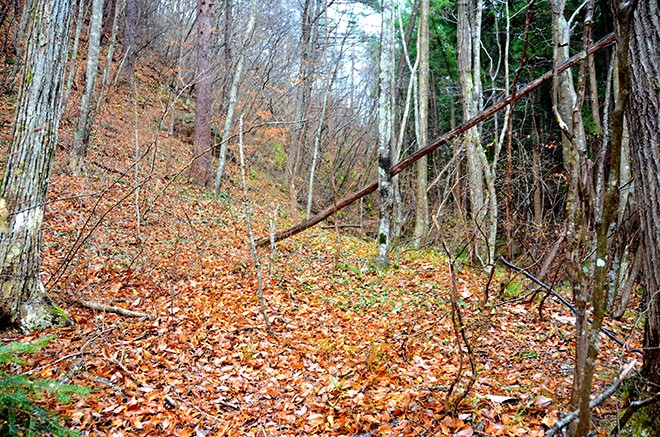 Radiation levels in mountain forests in Fukushima Prefecture remain relatively high compared with residential areas that have undergone decontamination work. The photo was taken in Namie in the prefecture in December. (Keitaro Fukuchi)

The monkeys were killed as agricultural pests, but for researchers like Suzuki, the animals are invaluable specimens to determine the effects of radiation from the Fukushima nuclear disaster.

Nearly 11 years after the triple meltdown at the Fukushima No. 1 nuclear plant, questions remain over the extent of damage to animals and plants caused by the radioactive substances released in the accident.

Suzuki, who specializes in radiobiology, hopes his studies will provide clues on the possible impact of the radiation on humans.

He and his colleagues have studied 709 macaques in Fukushima Prefecture since 2012. Of all the wild species available for study in the contaminated areas, macaques are most similar to humans.

The four dead macaques were given to Suzuki by farmers who destroyed the animals several hours earlier in Namie, a town that lies about 4 kilometers from the crippled nuclear plant. Parts of Namie are still off-limit due to high radiation levels.

Other primates used in the studies have come from off-limit areas in Minami-Soma, a city north of the nuclear plant, and elsewhere in the prefecture.

The researchers dissect the carcasses to determine if the livers, lungs, thyroid glands and muscle tissues were affected by radiation from the nuclear accident.

Deformations in plant lice and fir trees have been reported since the nuclear disaster started.

But Suzuki said he has seen no credible reports of such physical abnormalities in wild animals, including macaques, as well as domestic livestock.

However, damage might be occurring at the cellular level in the animals.

Background radiation levels in most of the mountain forests in Fukushima and neighboring prefectures are higher than those in residential areas, which have undergone decontamination procedures.

In the nature-filled areas that have not been decontaminated, macaques continue to be exposed to radioactive materials while feeding on polluted fruits and other food sources.

According to Suzuki’s studies, the muscles showed the highest concentration of radioactive cesium among all of the macaques’ organs.

The average radioactivity level in the thigh muscles was about 40,000 becquerels per macaque captured in Namie in fiscal 2013.

The researchers found that macaques exposed to higher radiation doses had slightly fewer blood-producing cells in bone marrow compared with the animals with lower exposure readings. The nuclear accident may have compromised some macaques’ ability to make blood.

The researchers used the density of radioactive cesium in the macaques’ muscles and in soil at areas where they were captured to calculate the level of radiation doses the animals were exposed to both internally and externally.

He said radiation exposure can increase the stress level in one organ, but the same dose could have the opposite effect in a different organ. One possible reason for this is that the animal’s defense system was galvanized to curb stress levels following exposure.

Suzuki emphasized the need to continue monitoring macaques and other animals to determine the impact from prolonged radiation exposure.

“So far, we have discovered no significant health hazards in the individual macaques studied,” he said. “But they continue to display changes in their cells and organs, albeit minor ones. We do not know what these changes will translate into in the long run.”

A study by other scientists showed that radioactive cesium from the nuclear accident could be traveling through food chains in the environment.

“If we can track down the movement of radioactive cesium in the food chain, the findings would show us its cycling mechanism in the ecosystem,” said Sota Tanaka, a researcher of radioecology at Akita Prefectural University.

He believes that studying the cycling mechanism of cesium will help to predict its long-term movement and lead to improved use of resources in mountain forests and the rebuilding of agriculture in contaminated areas.

Joint research by Tanaka and Taro Adachi, professor of applied entomology at the Tokyo University of Agriculture, found that radioactivity levels have decreased year after year in rice-field grasshoppers in Iitate, a village west of the stricken nuclear plant that still has some off-limit areas.

In 2016, all of the grasshoppers monitored had radioactivity readings below 100 becquerels per kilogram.

But garden web spiders in Iitate showed a wide range of readings from one year to the next. Their radioactivity levels were actually higher in 2015 than in 2014.

In 2016, one spider had a reading of more than 300 becquerels per kilogram.

Radioactive cesium remains on the ground even after rainfalls.

Plants rarely absorb cesium through their roots, but can become contaminated by falling cesium particles. And the researchers believe the cesium levels in grasshoppers have dropped steadily because they feed on the leaves of living plants.

As for the spiders, they are eating bugs that have high cesium levels because they feed on contaminated dead leaves mixed with contaminated soil, according to Tanaka.

That may be why the eight-legged predators are showing higher radioactivity readings than the grasshoppers, he said.

Their study also found that earthworms had radioactivity levels higher than those for the grasshoppers and spiders, likely because they are eating contaminated soil and withered leaves.