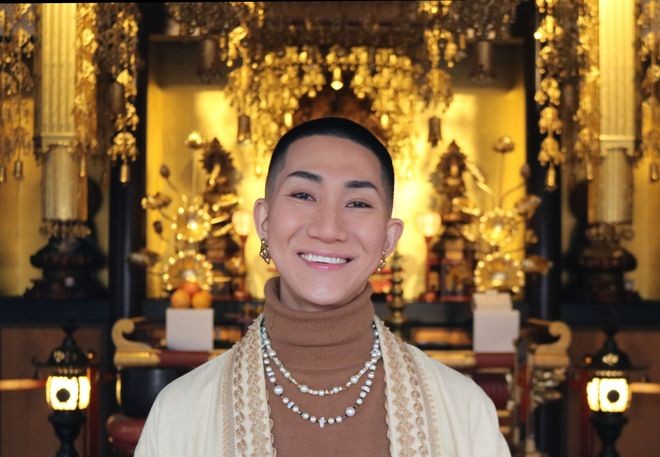 Kodo Nishimura stands against the backdrop of "naijin" (inner sanctum) in the main hall of a Tokyo temple where he grew up. (Yutaka Nakamura)

While other religions and cultures teach that homosexuality is sinful, Buddhist monk Kodo Nishimura is spreading the word that Buddhism preaches that all people can be liberated equally with no exceptions.

So, Nishimura, 33, who is also a makeup artist and an LGBTQ+ (lesbian, gay, bisexual, transgender, queer and others) person himself, published a book in English titled "This Monk Wears Heels: Be Who You Are" in February. He wants to share with the world "things only I can tell because I'm a homosexual monk."

"In Japan, it is not common for people to be torn apart over coming out as an LGBTQ+ because it would go against religious teachings, is it? But things are different outside Japan," the monk said. "I hear that there are about 70-plus countries where LGBTQ+ people are criminalized because of religious reasons. That's why I want to deliver my message to all kinds of sexual minorities outside Japan through the book."

LIVE LIFE AS HE IS

Nishimura grew up at a Tokyo temple of the Jodo sect of Buddhism.

After graduating from high school, he opted to go to the United States to study instead of becoming a monk.

Nishimura graduated from the Parsons School of Design in New York in 2013.

Before traveling to the United States, he felt a sense of guilt and inferiority about being different from other boys and being interested in men.

He couldn't bring himself to talk about his homosexuality to anyone and was left in anguish.

"I left Japan to seek a place where I could be myself," he recalled.

He also felt hesitant about coming out even in the United States.

But his attitude changed as he visited local LGBTQ+ communities, joined the NYC Pride March and through other experiences, believing that his deepest secret was actually a part of his true self that didn't need to be kept hidden.

At the design school, Nishimura majored in fine arts.

The dean of the department was gay, and he didn't try to hide his relationship with his partner, who also was his colleague.

There were also other LGBTQ+ instructors at the school.

Nishimura writes in the book that he gained a strong realization that there was nothing wrong with wearing makeup or being open about being homosexual after he saw how people were living their lives while being true to themselves.

Still, he had a difficult time coming out to his parents.

While he was studying in the United States, Nishimura met a 16-year-old Mexican boy at the LGBTQ+ youth community in Boston.

The boy had come out to his parents in Mexico, but his parents would not accept him and abandoned him. So, he fled to the United States as an immigrant.

He vividly remembers how the boy, still naive looking, kept his head lowered and said nothing.

Nishimura could finally come out to his parents when he was 24 after graduating from the design school.

He said it became intolerable for him to endure the heavy feeling that had shrouded his heart like a fog.

His mother had relief on her face, saying that it felt like as if a mist had cleared. His father, who is a Buddhist philosopher and the priest of the temple, told him to live as he liked because it was his life.

Looking back, it was such a relief when his parents accepted their son for who he really was without the slightest hesitation that he could only smile.

BEING SAVED IS BEING FREE

Although Nishimura had an option to work solely as a makeup artist after graduation because he had gained experience through an internship when he was a student, he decided to undergo Buddhist training.

Nishimura was born in a temple that has existed since late medieval times, and he had no intention of taking over the temple. In fact, he had a strong dislike for Buddhism because he thought that it is very limiting and does not accept homosexual like him.

However, he thought that turning his back on his own roots would be wasting an opportunity. He realized that he actually did know enough about Buddhism, and he was judging it with a prejudiced view.

Soon after Nishimura started his training, he found a passage from the "Amida Sutra" that says blue lotuses emit a blue light, yellow ones a yellow light, red ones a red light and white ones a white light, with each of the lotus flowers glowing in their own color, which means that each person should shine in their unique color, and diversity is beautiful.

"Buddha teaches that everyone will be liberated equally, and it is my mission as a monk to deliver this message to the world," Nishimura said.

After going through the training program on and off for two years, Nishimura officially qualified as a priest in 2015.

Upon publishing the new book outside Japan, he thought about his Italian friend raised by his faithful parents who taught their son that homosexuality was a sin.

After he became a monk, Nishimura told him Buddhism teaches that being LGBTQ+ is not an issue and that it is all right to be true to oneself and be happy with the loved one.

When his friend thanked Nishimura, the monk felt as if the tension was relieved from his friend's shoulders.

"I think there was something that particularly resonated in his mind when I, who is a monk, told him it was all right, even though I practice a religion different from what he believes in," Nishimura recalled.

For information about the English edition of "This Monk Wears Heels," visit Watkins Publishing at (https://www.watkinspublishing.com/shop/this-monk-wears-heels-be-who-you-are/).