Ukrainian expats desperate to bring families to safety in Japan

Maryna Amauri, a Ukrainian who runs a restaurant-bar with her husband in Yokohama, is in constant fear for her parents in Zaporizhzhia, a city in southeastern Ukraine that has been repeatedly shelled by Russian troops. (Nobuo Fujiwara) 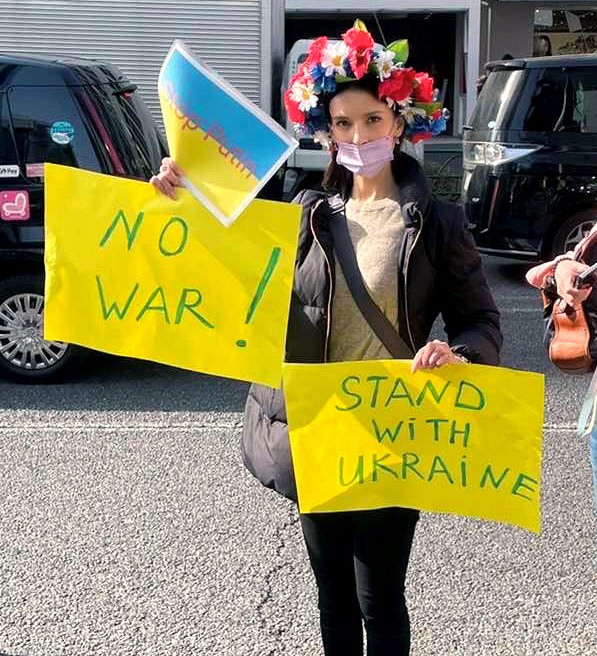 Prime Minister Fumio Kishida’s pledge to welcome Ukrainians fleeing their country has provided hope to expats here with loved ones in Europe who are desperately trying to survive the Russian invasion.

But the optimism fades when reality sinks in.

Yana Umatova, a fashion model living in Tokyo’s Koto Ward, has broken free of her busy schedule to gather as much information as possible to help her mother, Irine, escape the battles in Ukraine and reach Poland for a trip that would eventually bring her to Japan.

Umatova said she has suffered through sleepless nights since Russia invaded her homeland on Feb. 24, worried sick about the safety of her 55-year-old mother.

The daughter said all she can do now is “whatever I can to help her, even if it’s only a little.”

After the invasion started, Irine and her relatives fled to an underground subway station yard. She then sought shelter at a friend’s home, several hundred kilometers west from Kyiv.

Irine has told her daughter in phone calls that she spends most of the time in a basement room at the home.

Air-raid sirens have frequently sounded, but Irine said she sometimes cannot hear the warnings because the home is in a suburb.

People at the home keep an around-the-clock vigil to make sure they do not miss the sirens.

Although Umatova is in Tokyo, she often joins the rotation by checking an app that the Ukrainian government uses to spread information about Russian aerial attacks.

When she sees an air-raid warning issued for the area where her mother is staying, she calls Irine and the other housemates to let them know.

Sometimes, the daughter stays up all night monitoring the app.

Umatova hopes her mother can somehow get to Poland safely, but that is now a tough task because of gasoline shortages and routes crowded by others trying to flee.

She said her mother, who has visited Japan five times for sightseeing, wants to make a sixth trip here for her survival.

“Putin may break our cities, but he can never break our strong hearts full of love, hope and faith,” Umatova said.

Another woman in the Tokyo metropolitan area has started a fund-raising campaign to bring her family in Ukraine to Japan.

On March 6, the couple performed the tango in front of diners and urged them to donate for the cause.

Amauri, who came to Japan 20 years ago, said she hopes to use the donations to buy electronic tickets and send them to her parents via email.

Her parents live in Zaporizhzhia, a city in southeastern Ukraine that hosts one of the largest nuclear power plants in Europe.

A fire broke out at the nuclear plant when Russian troops shelled the city and later captured it on March 4. The fire was doused, but it sent fears around the world about another possible nuclear disaster.

Amauri said her parents have taken shelter in the basement area of a city building. They return to their home when the alert is lifted and can still hear the sound of bombings when they are there, the daughter said.

People in the city are running low on food and trying to escape to Poland. But trains and buses are overcrowded with evacuees, and her parents have been boxed in.

On March 6, during the fund-raising event in Yokohama, Amauri received an email from her mother, Iryna Khoruzhevska, who said she had temporarily returned home from the shelter and had an internet connection.

Amauri immediately made a video-phone call to her mother.

Her mother looked strong, but tears were flowing from her eyes.

Her father, Sergey Khoruzhevskiy, told Amauri that they were running out of food and seeing many Ukrainian soldiers setting up barricades outside.

The connection was interrupted several times during the phone call.

But Iryna could tell Amauri, “We are all right, so please don’t worry.”

In tears, Amauri responded, “We will keep trying, so you, too, hang tough, please.”

They managed to say good-bye.

“I couldn’t care less about my job and money. There is nothing more precious than family,” Amauri said.

(This article was compiled from reports by Takuya Miyano and Nobuo Fujiwara.)