EDITORIAL: Biden points the way on sanctions and Japan should follow 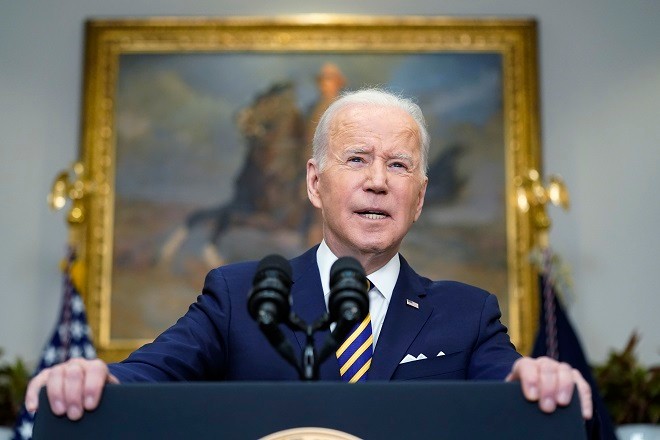 President Joe Biden announces a ban on Russian oil imports, toughening the toll on Russia’s economy in retaliation for its invasion of Ukraine. He made the March 8 announcement in the Roosevelt Room at the White House in Washington. (AP Photo)

Russia’s aggression against Ukraine grinds on, with mounting civilian casualties. Stronger condemnation by the international community over Russia’s lawless invasion is a necessity, as are enhanced efforts to stop it. Economic sanctions against Moscow are a key means to achieve the goal. Japan should consider additional steps to tighten the economic vice around Russia.

“We’re moving forward on this ban, understanding that many of our European Allies and partners may not be in a position to join us,” Biden explained.

The United States, Europe, Japan and many other countries have acted together in imposing a broad slate of economic sanctions against Russia, including freezing the foreign currency assets of the country’s central bank and prohibiting exports of certain high-tech products, including advanced semiconductors, to Russia. These measures have caused the ruble to crash and a growing number of foreign companies have decided to stop operations and sales in Russia.

As a leading exporter of natural gas and oil, Russia can keep earning a sizable amount of foreign exchange as long as it can sell energy to other countries. The U.S. ban on Russian energy is aimed at dealing a major blow to the country’s main source of foreign exchange. The United State can afford to take this step because it is a leading oil producer. We wholeheartedly support this decision.

Germany, on the other hand, has said it has no choice but to continue importing Russian energy because of its dependence on oil and gas from the country. The European Commission has outlined proposals to “make Europe independent from Russian fossil fuels well before 2030.” The commission says Europe should consider ways to diversify energy suppliers and develop more renewable energy. One goal is to cut natural gas imports from Russia by two-thirds by the end of the year.

What should Japan do? Russian natural gas and crude oil account for about 8 percent and 4 percent, respectively, of Japan’s imports of these materials. Much of the imports come from the giant Sakhalin-1 and 2 oil and gas projects, which involve both the Japanese government and the private sector. There are bound to be significant consequences if Japan cuts or stops imports of Russian oil and gas while the world faces an energy crunch.

Since its dependence on Russian energy is smaller than Europe’s, Japan has more room for maneuver on this matter. This is a time for Japan to play a role in strengthening the foundation for international solidarity against Russia’s aggression. At the very least, Tokyo should seek to reduce Japan’s imports of Russian crude in stages.

With regard to Sakhalin-1 and 2 and planned energy projects in Russia, Japan should weigh a range of options while evaluating the effectiveness of withdrawing from them as a means to punish Russia. The government has the primary responsibility for working out plans to deal with the matter since joint energy development projects with Russia are promoted as a national policy.

If imports are to be reduced, Japan will need to find alternative supplies, at least for the time being. But Japan should not increase its dependence on fossil fuels over the medium- and long-term, given the policy imperative of slashing carbon emissions.

In tackling this challenge, the government should focus on moving forward in its efforts to reduce its carbon footprint.

For now, it is vital to prevent soaring energy prices from wreaking havoc on the overall economy. Higher energy prices offer the benefit of curbing demand for fossil fuels. But they are likely to trigger broad price hikes for daily necessities, which would place low-income households under heavy financial strain. This requires the government to take well-targeted policy measures to deal with the challenge.