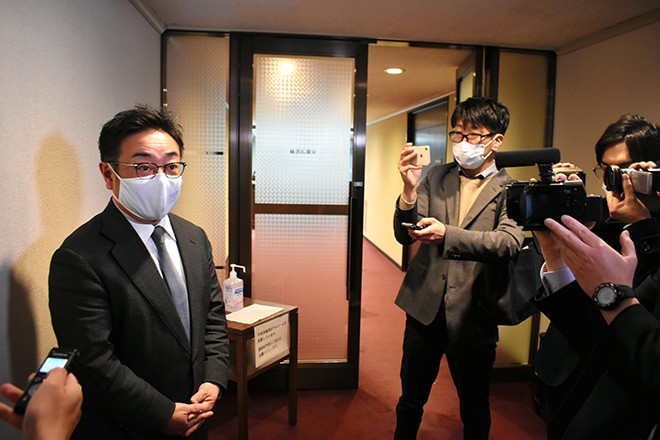 Four municipal assembly members in Hiroshima Prefecture on March 9 submitted letters of resignation after learning that they would be indicted on bribery charges in a vote-buying scandal.

They had received money from former Justice Minister Katsuyuki Kawai or his wife, Anri, to help her win a seat in the Diet in the 2019 Upper House election.

Ryoji Imada, Ganpaku Toyoshima and Hiroshi Kaitoku, who are Hiroshima city assembly members, each received 500,000 yen ($4,300) from the Kawai side, according to the investigation.

The Hiroshima city assembly was expected to accept their resignations on March 10.

Imada told reporters on March 9, “I could not return the (money) at the scene, and that is where it all begins.”

Toyoshima said, “I am deeply ashamed that I could not decline the (money).”

Kaitoku said he was “naive” when he accepted the cash.

The Onomichi city assembly has accepted the resignation of Koichiro Sugihara, who had received 300,000 yen from the Kawais.

Katsuyuki and Anri Kawai were both convicted of vote-buying in the election and were forced to vacate their seats in the Diet. Katsuyuki received a three-year prison sentence while his wife was given a suspended sentence.

The Tokyo District Public Prosecutors Office in July 2021 said charges would not be brought against 100 individuals who received money from the Kawais because the recipients played only a “passive” role in the scandal.

However, a prosecution inquest panel in January this year concluded that 35 of those 100 individuals should be indicted on charges of violating the Public Offices Election Law because they accepted a larger amount of money, did not return the money, or refused to resign after the scandal came to light.

Prosecutors, forced to conduct a reinvestigation, decided to indict or bring summary indictments against 34 of them and exclude one person who is ill. They informed some of the 34 politicians about the decision on March 9.

The four who submitted their resignations on March 9 said they would not fight the charges.

Nobuya Okuhara, a Hiroshima prefectural assembly member who received the largest sum, 2 million yen, told reporters on March 9 that he would also accept the summary indictment brought against him.

He did not say if he would step down.

“I will first tell my supporters and then hold a news conference,” he said.

Three Hiroshima city assembly members—Hiroyuki Fujita, Akiyoshi Ito and Masaaki Miyake—held a news conference on the evening of March 9 and said they would not accept the summary indictments and fight the allegations in formal trials.

They also said they will remain at their posts.

A summary indictment is a criminal procedure in which prosecutors punish a person by a fine and other means with prior consent of the accused. Formal trials are generally not held in such cases, unless the summary court disagrees with the indictment.