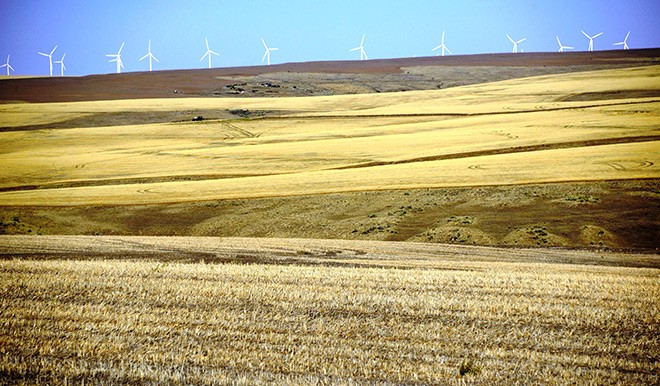 A wheat field in the U.S. state of Oregon (Asahi Shimbun file photo)

The government will raise the average price of imported wheat sold to millers by 17.3 percent from April, with a more devastating increase expected later because of Russia’s invasion of Ukraine.

The hike, which covers the six-month period through September, will raise the average resale price of five varieties of imported wheat to 72,530 yen ($630) per ton, the agriculture ministry said on March 9.

That means consumers will pay more for flour, bread, noodles, pasta and many other foods made of wheat.

International prices of wheat grown in the United States and Canada have surged because of poor harvests in North America. Japan depends on the two countries for most of its wheat imports.

Japan imports 80 to 90 percent of wheat consumed in the country.

The higher resale price from April is based on global market trends until the first week of March, the ministry said.

But an even sharper increase is expected in the next review of the government resale price of wheat six months later because of the war between Russia and Ukraine, two leading wheat producers, according to analysts.

There is usually a time lag of three months between an increase in the government resale price and a related spike in retail prices of food.

Analysts said retail prices will likely surge in summer when millers run out of the current inventory of wheat purchased at the resale price set through March.

The government had already increased the resale price for the October-March period.

The previous increase and next hike in the wheat resale price will lead to an average annual spending increase of 2,000 yen per household, according to Hideo Kumano, chief economist with Dai-ichi Life Research Institute.

“The global competition for wheat will only heat up as countries in northern Africa and the Middle East that have relied on imports from Russia and Ukraine are now scrambling to secure supplies from elsewhere, and China is stockpiling the crop from a strategic viewpoint,” he said. “The next resale price will have a far-reaching impact.”

The government secures wheat through planned purchases and sells it to millers and other businesses. It reviews the resale price every six months based on the most recent purchase prices and other factors.

In the latter half of fiscal 2008, wheat prices shot up globally because of heavy demand for food among emerging economies and for sources of biofuel.

(This article was written by Kenichi Goromaru and Yuji Yamashita.)