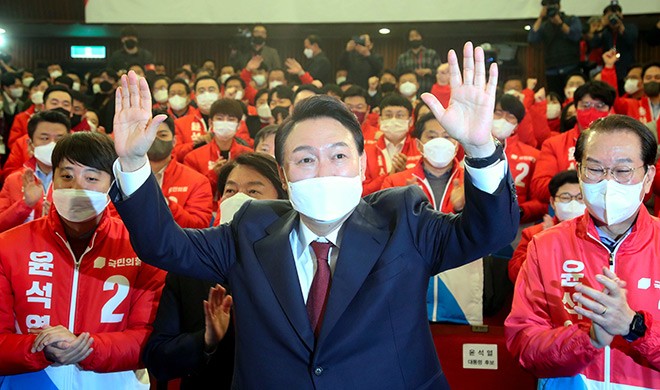 Yoon Suk-yeol celebrates along with his supporters early on March 10 after he declared victory in the South Korean presidential election. (Provided by Dong-A Ilbo)

Prime Minister Fumio Kishida hailed the election of a new president in South Korea and vowed to work closely with Yoon Suk-yeol to improve bilateral ties at “a defining moment for this age,” referring to fears of a possible world war sparked by Russia’s invasion of neighboring Ukraine.

Speaking with reporters on March 10 hours after Yoon declared victory, Kishida said: “The international community is now facing a major change that could be a defining moment for this age. A sound Japan-South Korea relationship is essential for bringing about international order based on rules as well as for the peace, stability and prosperity of the region and the world. Cooperation between our two nations with the United States is also important.”

The prime minister said he had no specific plans for a conference call with Yoon.

Kishida inevitably was asked for comment on his expectations of Yoon with regard to issues of a historical context that sent bilateral ties to their lowest level since the two countries normalized their diplomatic relations in 1965. They include lawsuits filed by former Korean laborers brought to Japan before and during World War II and lingering angst over former “comfort women” who were forced to provide sex to wartime Japanese military personnel.

“These issues cannot be left unattended,” Kishida said. “It will be important to attempt to engage in close communications with the new South Korean administration and president in order to bring back a sound relationship based on Japan’s consistent stance that pledges made between nations should be kept.”

That comment referred to a 1965 agreement that normalized diplomatic relations with the proviso that it settled all outstanding grievances with regard to Japan’s annexation of the Korean Peninsula from 1910-1945 as well as Japan’s decision in 2015 to set up a foundation for the former “comfort women.” Japan provided 1 billion yen ($8.6 million) to the fund, but it was dissolved by South Korea without Tokyo’s consent.

During the South Korean presidential election, Yoon indicated that he wanted to work to improve ties with Japan. Yoon, however, won by only a razor-thin margin and the progressive Democratic Party that backs incumbent President Moon Jae-in holds a majority in the South Korean National Assembly.

Kishida is deemed unlikely to push for improved ties with South Korea until after this summer’s Upper House election.

Kim Sung-han, a professor of international relations at Korea University in Seoul who serves as a foreign policy adviser to Yoon, expressed an understanding of the Kishida administration’s eagerness to avoid any diplomatic upheaval prior to the Upper House election this summer.

A high-level meeting between the two countries went ahead in February in Hawaii on the sidelines of a trilateral meeting that also included
U.S. Secretary of State Antony Blinken. The talks between Foreign Minister Yoshimasa Hayashi and his South Korean counterpart, Chung Eui-yong, however, quickly dissolved into a repetition of past stances
on the comfort women issue.

But Japan did not help matters when it decided that same month to nominate ancient gold and silver mines on Sado island for inclusion in the UNESCO World Heritage list. South Korea was enraged and accused Japan of not having adequately addressed the issue of Korean laborers brought to work in the mines before and during World War II.

A high-ranking Foreign Ministry official said the government would adopt a wait-and-see approach with regard to how the new administration in Seoul deals with foreign policy from May.

“The views expressed by South Korea have changed before and after elections in the past and public sentiment is also an important factor,” the official noted.

Yoon has also stated that he wanted to take a tougher stance against North Korea. He criticized Moon’s attempts to improve ties with Pyongyang and said secure deterrence was the only way to maintain peace on the peninsula and beyond.

Yoon has also said he wanted to strengthen the alliance with the United States.

(Takuya Suzuki in Seoul and Yuichi Nobira in Tokyo contributed to this article.)