White Data Center in Bibai, Hokkaido, plans to farm eels by making use of exhaust heat from snow used to cool servers. (Video by Hiraku Toda) 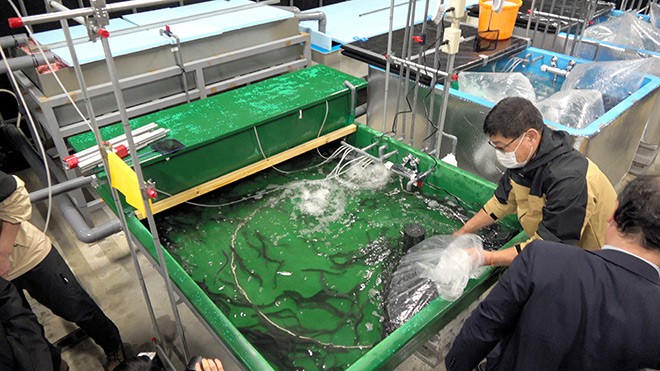 Snowmelt is used for eel farming in Bibai, Hokkaido, on Feb. 25. (Hiraku Toda)

BIBAI, Hokkaido—A data center here that uses snow to cool down its heated servers is now using the snowmelt to farm eels.

Around 1,700 elvers brought in by plane from Kobe were released into tanks at a facility of White Data Center (WDC) on Feb. 25. WDC plans to market the adult fish as “the first eel cultured in Hokkaido.”

The company’s goal is to use as an energy source the heavy snowfalls that cause problems for Bibai residents every winter. It started the data center business in April last year, and construction of a large building will begin for full-scale operation in fiscal 2022.

The company plans to take advantage of snow collected from streets to cut air-conditioning costs and reduce carbon dioxide emissions while cooling servers and networking equipment that operate around the clock.

The process increases the snowmelt’s temperature to 33 degrees, so the warmed liquid can be used for growing eels.

WDC, which plans to secure revenue via indoor culturing of agricultural and fishery products until the data center business goes into full-scale operation, has tested abalone, sea urchin, Japanese mustard spinach, cherry tomatoes and other products.

The company picked eels and tree ear mushrooms as the first products because they can be shipped after short cultivation cycles.

In November last year, WDC set up a farming facility for 6,000 eels with Bibai city’s assistance. Water temperatures in tanks there will be kept at 27 degrees all year, and filtered snowmelt will be used to help determine if the eel’s taste and growth speed improve.

The eels will be grown for seven months to at least 250 grams before shipment. An annual shipment target of 300,000 eels has been set for 2023.

The eels are expected to be sold nationwide and offered for local school meals.

Kota Honma, a WDC director and chairman of the Bibai Nature Energy Research Association, which has been studying how to use snow as cooling energy for 25 years with officials from the city, industry and academia, expressed high expectations.

“The northernmost region where eels live in the wild is Aomori Prefecture,” he said. “Eel farming has not been carried out in Hokkaido. We want to market Hokkaido-produced eels cultured in a hygienic indoor environment.”