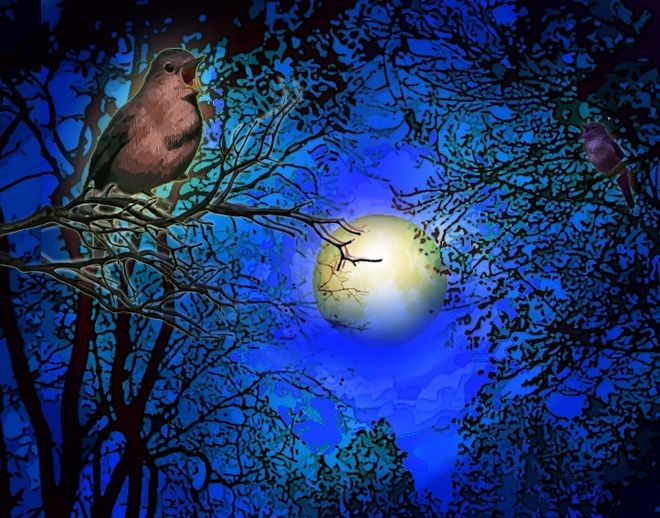 no blossom no leaf
on the cherry tree
greenfinches
--Helga Stania (Ettiswil, Switzerland)

St Patrick’s Day...
the many shades of green
yet to come in spring
--Ed Bremson (Raleigh, North Carolina)

While praying by moonlight in wartime, the haikuist heard a song deserving of decoration. A legendary round metallic “killing stone,” which contained the disease-spreading power of a nine-tailed fox demoness who came from the continent during the Heian Period (794-1185), suddenly broke in half last week. Matsuo Basho rode on horseback to view it in 1689 guided by a farmer to its location near a hotspring in the mountains of Tochigi, where he composed this hokku: no-o yoko-ni uma hiki-mukeyo hototogisu.

Lead the horse
toward the moor where
cuckoo cries

Murasaki Sagano composed a haiku implying that she is “worried about Ukrainians.” Luciana Moretto suggested that an overcast spring conveys the idea that, “the latest events changed everything, here in Europe there is a lot of concern.” She added that reading and writing haiku poetry, “is our means of salvation.”

Peach blossoms
petals out there far
on the wind

A silvery worm moon glows tonight. Marina Landy took care not to step on an earthworm that oozed out of the ground after heavy rain in Victoria, British Columbia.

Wormwood is another name for the potent, green, aniseed-flavored alcoholic spirit offered in this haiku by C.X. Turner in Birmingham, England.

Absinthe--
your strength never comes
from the bottle

Tokyo-based travel writer Rob Goss said he heard a singing sound while “walking on the purposefully squeaky ‘nightingale’ floorboards at Nijo Castle in Kyoto.” The storyteller added that the legendary wood flooring nails squeak to catch ninja, “trying to sneak into the palace in the wee hours…”

Kaito Kawauchi was impressed by the ephemeral movement of myriad flowers near Sumiyo Junior High School on Amami-Oshima island. His schoolmate, Ryusei, sipped cherry blossoms that had been preserved in sea salt. Kotenyu Chibana might have recited a line from an English lesson.

Countless momentary things
next to spring
they were dancing

This is a book
fall reading
makes me calm down

far before sunrise
the lightness of being
a robin’s song

abundance of worms
the yearning
of the nightingale

the robin with worms
stares at the seagulls
mine mine mine

Students at Ichi Junior High School on Amami-Oshima island look forward to welcoming back hawksbill and green turtles from their long-distance migrations, according to first-grader Yudai. He studied how to write haiku in English with Sumiyo Junior High School student Ai Urui, who hopes the females return to nest under a full moon.

Drifting moon
alone on an autumn night
no one reaches

Sandra St-Laurent greeted hundreds of trumpeter and tundra swans at a “Celebration of Swans” event held every March in Marsh Lake, near Whitehorse, Yukon. She said people gather at Swan haven to watch swans fly in “like ballet dancers… until the final bow when they are tired and fold like origami swans… settle and rest, undisturbed by the ice floes.”

noisy as usual
the whooper swans got in
late last night

Yutaka Kitajima was moved to tears watching an Olympic skeleton bobsledder flash a small sign that read “No War in Ukraine” to the cameras. Ramona Linke folded 1,000 paper cranes in Beesenstedt, Germany. In Rousse, Bulgaria, Lilia Racheva wrote two haiku while folding paper and watching celebrations in a stadium nicknamed the Bird’s Nest.

From Beijing
a desperate plea
for world peace

blue and yellow
senbazuru
for peace

fireworks and flags
in the bird’s nest
Winter Olympic Games

John Zheng kept his pet close to his heart in Greenwood, Mississippi. Mohammad Azim Khan has a soulmate in Peshawar, Pakistan.

cold night
under my jacket
my parakeet

robin
my throbbing heart
in your redbreast

Balmy wind--
on a pilgrimage
in line with geese

At dusk in Victoria, Texas, birders can observe warblers, hummingbirds, woodpeckers and even pet peacocks roaming the neighborhoods. Randall Herman saw birds alight one after another on rain-filled roads to ruffle their feathers in little oases before going to roost for the night. Jacobson admired a spinner. Murasaki Sagano respected a jumper.

green
hummingbird
of her skating skirt

The king of jumpers
dreams on the ice rink
crocuses

Global warming has shifted the seasonal rhythms of trees and flowering plants. This in turn forced insects and birds to synchronize with the flora they eat. Wieslaw Karlinski scheduled a visitor in Namyslow, Poland. Susan Bonk Plumridge kept tabs on the weather for London, Ontario, in a poetry book filled with seasonal references. Stephen J. DeGuire braced for the first spring gust to hit Los Angeles. Zheng watched cattle swish their tails.

in my garden
homeless for now
the first starlings

brown paper package
the next anthology
in the mail

gathering dusk
a cloud of gnats
shroud the cow

Researchers at the University of Cambridge discovered that plants in Britain are flowering one month earlier than they did during the days of William Wordsworth (1770-1850). Nazarena Rampini noted this season creep, “Every year on the first day of cold weather a robin comes to live in my garden, at the first warmth it departs from Pogliano Milanese, Italy.” The haikuist our thomas laments season creep in Exeter, New Hampshire. Khan’s neighbor recycled environmentally friendly tufts of coconut husk.

robin
among the first spring flowers
his farewell note

bird’s nest--
in the winter oak
my sadness

robin
my coir mat
in your nest

Angela Giordano tried to recall a song in Avigliano, Italy. In St. Louis, Missouri, Pippa Phillips knew that female wood thrushes don’t sing. Wistfully recalling a visit to London, Xenia Tran wondered if the warmer-weather loving flycatcher will one day migrate to sing to her at home in the Scottish Highlands. Writing from Glasgow, Tony Williams admitted, “Sadly, I have yet to hear a live nightingale. Maybe one day.”

forgetting
the sound of your voice...
a nightingale

the songs
she would have sung
the nightingale

Primrose Hill--
a nightingale scatters light
from the stars

chilly day…
a little warmth
from a robin’s chest

Francoise Maurice in Draguignan, France, alluded to cosmology in the search for answers about the sky. Karlinski turned to prayer.

celestial vaults
a nightingale offers
the song of a flute

nightingale song
fell silent for a while
monks’ prayers

Mircea Moldovan couldn’t see the flutist in Jibou, Romania: smog a flute is heard in the neighborhood.

all talk no action
peacocks do it better
feathers ruffled

Stoianka Boianova in Bulgaria and Zelyko Funda in Croatia, respectively, invoked images of Florence Nightingale (1820-1910), the pioneering nurse who earned the moniker “The Lady with the Lamp” during the Crimean War.

intensive care unit
the beepings are assisted
by a nightingale

Suzuki lives in Osaka, near enough to Kyoto where the season words in his saijiki originated. He noted, “From the middle of March, I can listen to the sound of uguisu (Japanese bush warblers) through paper-covered sliding doors.” Mihovila Ceperic-Biljan listened through her pane in Rijeka, Croatia.

Through a shoji
the first whistle of
the nightingale

my grown-up son...
the nightingale’s lullaby
through a closed window

Morning walk--
before me scurries
a wagtail

Kitajima happened upon a flock of wild geese. While adjusting his viewfinder, he was photo-bombed by a greenbul. Later in the deep snows, he spotted mottled brown plumage. Archie Carlos sensed new nests will soon be needed in St. Louis Park, Minnesota.

Kanematsu waited in vain to record the date when white herons and carp might return. His first line suggests it may take a few years.

Dredged river--
where have they all gone?
white herons

John S. Gilbertson reported on the pandemic in Hokkaido. Mark Hitri wrote an ode to a nightingale in Fort Worth, Texas.

Laurence Raphael Brothers reread the romantic spring poem “Ode to a Nightingale” (1819) by John Keats (1795-1821), who defined negative capability as an investment in an artistic vision of beauty that doesn’t really exist.

the end of the year
a nightingale changes
its direction

The protagonist in Sweeney’s haiku, Nikola Tesla (1856-1943), the inventor of electric light, said pigeons never leave: “I have been feeding pigeons, thousands of them for years. But there was one, a beautiful bird, pure white with light grey tips on its wings; that one was different… As long as I had her, there was a purpose to my life.”

See something to sing about at http://www.asahi.com/ajw/special/haiku/. An Asahi Haikuist Special column appears March 25 to share the results of the 11th Matsuyama Photo Haiku Contest supported by The Asahi Shimbun. The next regular issues of the Asahi Haikuist Network will be published April 1, 15 and 29. Readers are invited to send haiku about fools, human nature or nature on a postcard to David McMurray at the International University of Kagoshima, Sakanoue 8-34-1, Kagoshima, 891-0197, Japan, or e-mail to mcmurray@fka.att.ne.jp.