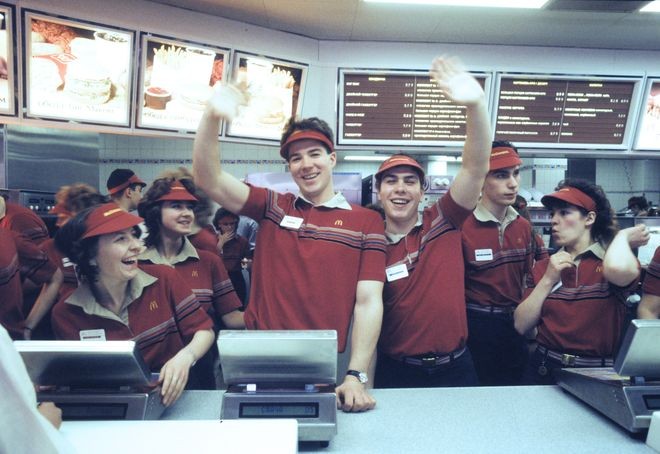 More than 30,000 people waited in line when McDonald’s Corp. opened its first outlet in the Soviet Union in downtown Moscow on Jan 31, 1990.

The burgers were shockingly overpriced, but that did not deter the customers from devouring them as if there was no tomorrow.

The Cold War had only just ended in defeat for the East. Those iconic sandwiches not only symbolized capitalism, but also stood for the Russian public’s longing for U.S. culture itself.

The Soviet system collapsed the year after the Golden Arches appeared in Moscow.

Over the next three decades, the number of McDonald’s outlets grew to 850 across Russia.

But in reaction to the Russian invasion of Ukraine, the U.S. fast food giant has decided to temporarily close them all, and other U.S. enterprises such as Starbucks Corp. and Coca-Cola Co. have also followed suit.

Japan’s Toyota Motor Corp. has suspended production at its Russian plant, and Fast Retailing Co. announced it will suspend operations at all its Uniqlo outlets in Russia. Marugame Seimen, a fast food chain specializing in Japanese “udon” noodles, has also decided to remain temporarily closed.

Apparently angered over the escalating “Russia boycott” by world-class corporations, Russian President Vladimir Putin vowed to “act decisively” by threatening to introduce, if necessary, “external management and then transfer these enterprises to those who want to work.”

A quarter of a century ago, Putin was one of the most vocal proponents of inviting foreign investment. As a senior municipal official of St. Petersburg, he succeeded in bringing German conglomerate Siemens AG to the city. His interest in foreign capital remained unchanged after he became president, and he even took the trouble to attend Toyota’s groundbreaking ceremony.

But now, he has turned foreign capital into a target of his hostility and intimidation. Such blatantly vengeful conduct will only paint him into a corner.

Russian forces are steadily closing in on the Ukrainian capital of Kyiv. The civilian toll, including that of children, is rising by the day.

When will Muscovites be able to enjoy “real American” burgers and “authentic Japanese” udon to their hearts’ content again, I wonder.