Court opens way for victims of sterilization to get redress 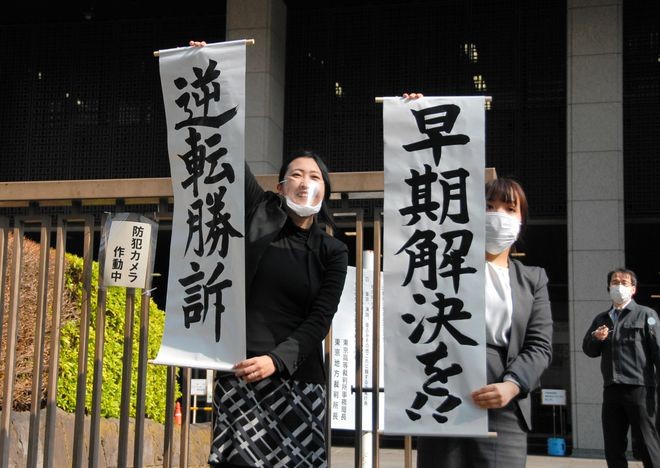 Lawyers hold up signs saying the Tokyo High Court on March 11 ruled in favor of their client. (Shunsuke Abe)

A Japanese court handed down a ruling that has wide-ranging implications for victims of a forced sterilization program by ordering the central government to compensate a 78-year-old man who underwent the procedure in 1957.

Although the Tokyo High Court decreed there should be a limit on the statute of limitations for submitting lawsuits, as did another high court in February, the March 11 ruling went further by stating that other victims of the scrapped Eugenic Protection Law also had the right to submit lawsuits until 2024.

The court declared that the law, aimed at “preventing the birth of inferior offspring” and performed on people with various disabilities, was unconstitutional. It ordered the government to pay 15 million yen ($128,000) in compensation.

The law remained in effect until 1996 when it was revised and renamed the Maternal Health Law.

Presiding Judge Yutaka Hirata also expressed his views in a rare direct statement to the plaintiff, a resident of Tokyo.

“I hope the plaintiff will be able to lead a happy life,” Hirata said. “I believe it is the responsibility of not only the government but society as a whole to ensure there is no discrimination so that everybody can lead as happy lives as possible.”

Applause erupted in the courtroom and the plaintiff bowed to the judge.

At a news conference following the ruling, the plaintiff said in a teary voice: “I was overcome with emotion because the judge addressed me personally. I never dreamt such a thing could occur.”

The plaintiff’s lawyer, Naoto Sekiya, said at the news conference, “The Tokyo High Court has opened a course for not just the plaintiff but all victims to be saved.”

“It (the ruling) is unprecedented and I believe it will affect future rulings,” said Tomomichi Watanabe, a professor of civil law at Tokyo’s Seikei University.

The Osaka High Court in February for the first time ordered the government to provide compensation on grounds the statute of limitations should not apply when a significant violation of the concepts of justice and fairness applied.

In the March 11 ruling, the Tokyo High Court laid out specific factors for not applying the statute of limitations on submitting lawsuits seeking compensation.

The ruling said the government policy of forced sterilization was a massive violation of basic human rights that also inflicted secondary and tertiary psychological as well as physical damage by making it impossible for victims to recover their reproductive functions.

It also blasted the government for ignoring the issue for decades and not making any investigation into the heartache the law and its application caused. As a result, the 20-year statute of limitations passed with many victims having no idea they were effectively guinea pigs in an illegal government program.

The ruling also stated that provisions of the Civil Law regarding the statute of limitations should not infringe upon the right to seek compensation guaranteed by the Constitution, a position that was taken by the Osaka High Court earlier this year.

Not allowing victims to seek compensation because of the statute of limitations would go against the concepts of justice and fairness, the Tokyo court added.