Ukraine calls on Japan to cut all ties with Russian cities 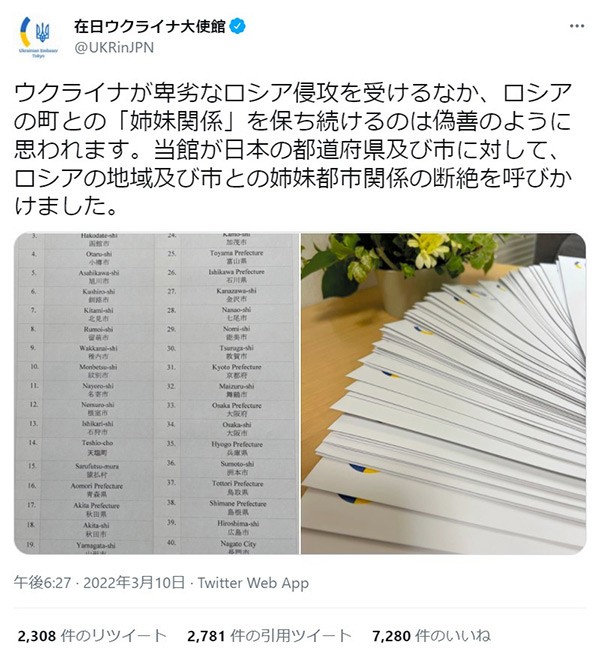 A tweet by the Ukrainian Embassy, since removed, asks Japanese municipalities to end sister-city ties with Russian towns. (Captured from Twitter)

The Ukrainian Embassy in Tokyo called on local authorities across Japan to sever sister-city relationships with municipalities in Russia, then backtracked and admitted it might have gone overboard.

A tweet and letters from the embassy left local officials perplexed.

The original tweet stated, “We believe it is hypocritical to continue maintaining ‘sister-city relations’ with towns in Russia while Ukraine is being hit by a despicable invasion from Russia.”

But the embassy then underwent a change of heart with an updated tweet posted late March 11 urging authorities in Japan to take note that male students in Ukraine cannot go abroad or even study because they must fight for their nation.

An official with the Ishikari city government in the main northern island of Hokkaido acknowledged receiving a letter from the Ukrainian Embassy asking that the sister-city relationship be ended with Vanino in eastern Russia.

A similar letter was received at the Otaru city government, also in Hokkaido. Otaru has a sister-city relationship with Nakhodka, also in eastern Russia.

Officials with the two Hokkaido cities said they were still considering their response, with one Otaru official saying it was unheard of to be asked to end a cooperative relationship.

Other local governments have decided to suspend exchange programs with their Russian counterparts, outside of the request from the Ukrainian Embassy.

Tokyo Governor Yuriko Koike announced March 11 that all exchange programs with Moscow and Tomsk oblast in south-central Russia would be suspended as a sign of solidarity with Ukraine.

But a metropolitan government official said the move had nothing to do with the Ukrainian Embassy request and explained that the sister-city relationship with Moscow would be maintained.

Hiroshima city also decided to cancel exchange programs with Volgograd in western Russia. The move was made in part because of an uproar over Russian President Vladimir Putin’s threat to use nuclear weapons.

However, a Hiroshima city government official added that the sister-city relationship with Volgograd would be maintained. One reason is that Volgograd serves as a vice president city in the Mayors for Peace program headed by Hiroshima Mayor Kazumi Matsui. In that role, Volgograd has sponsored an annual peace memorial event each Aug. 6 to mark the anniversary of the atomic bombing that leveled the city in 1945.

“(Volgograd) is important as a counter-partner that has accepted the views held by Hiroshima,” said a high-ranking Hiroshima city government official.

Nagato city in Yamaguchi Prefecture signed a sister-city relationship with Sochi in 2018 after it hosted a summit meeting between Prime Minister Shinzo Abe and Putin in 2016. A Nagato official said the city would continue to monitor developments.

The Tokyo University of Foreign Studies said it was asked to do so in a letter it received March 11.

“We protest the outrageous act by Russian leaders,” said an official handling public relations at the university. “But we also want to deepen scholarly exchange with Russian research institutes and educational institutions.”

Izumi Maeda, a professor of Russian literature, issued a protest statement against the invasion of Ukraine on March 7 with four faculty members teaching Russian.

“I believe that it is at times like this when cultural and linguistic exchange will serve as a catalyst to overcome hatred and division,” Maeda said. “I believe it is important to not ostracize Russian culture or Russians living in Japan.”

Sapporo, the capital of Hokkaido, has a sister-city relationship with Novosibirsk in central Russia.

A Sapporo official handling international exchanges said, “While it may not be possible right now for our two cities to engage in friendly exchange, our grass roots exchange is different from the relationship between nations. While trying to understand the thoughts of Ukrainians, we want to maintain a neutral stance.”