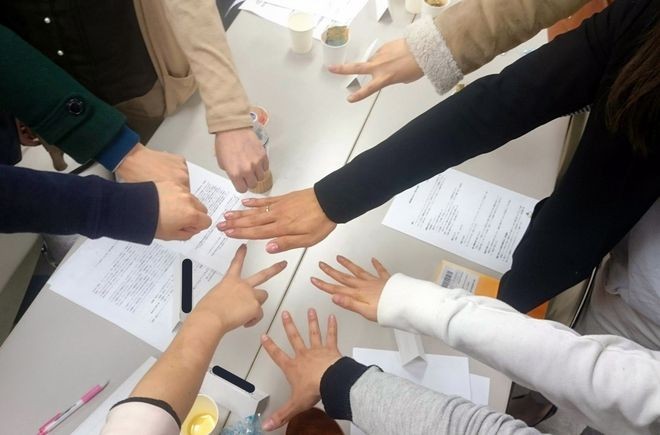 The series "Koisenu Futari" (The two not in love), which NHK began airing in January, opens with the female protagonist fretting about the fact that she is incapable of having romantic feelings.

Aromanticism is a type of sexual orientation in which people have little to no romantic attraction, while asexuality is the lack of sexual attraction to others. One can be either of the two or both.

The show proved challenging, yet rewarding, for its creators at the public broadcaster, who had to eschew ubiquitous tropes and storylines when writing it.

"Japanese TV dramas always come with hugging scenes, kissing scenes and weddings,” said Yuta Oshida, 33, who came up with the idea for the project. “I had unconsciously thought I couldn't bring a story to a close unless I provided such a relationship with male and female characters."

When Oshida was directing his first drama project, which was about high school students who dedicate themselves to "kagura" sacred Shinto music and dance, in his fourth year with NHK, he hit a snag.

As he discussed the story composition with the scriptwriter and other staff members, they thought it was strange not to feature romantic relationships for the young characters.

But it felt like the romance angle did not fit and was being shoehorned into the work. Oshida continued to question whether it was a necessary part of the story.

He later learned about asexuality and gained a deeper understanding of it by interviewing asexual people he met through a related person and at social gatherings.

He came up with ideas for "Koisenu Futari" and pitched it in May last year.

Some NHK staff members raised concerns about whether the project would work as a story. But others said audience members unaware of aromantic and asexual orientations may sympathize with the characters. They ultimately won out, and the project was greenlit for production.

In a survey conducted in 2019 covering 15,000 people living in Osaka, 0.8 percent identified as asexual.

But compared with LGBT sexual minorities, those who are aromantic or asexual remain lesser known to the public. And many suffer silently due to a lack of understanding of their sexual orientations.

Ken Nakamura, 25, who identifies as asexual, gives lectures and works to raise awareness on the topic. He noted that people who identify as aromantic or asexual keep a low profile, and because of that, they are often misunderstood.

"Some are hurt by remarks meant as goodwill gestures, like, 'You just haven't met the right person,'" Nakamura said.

According to an online survey conducted by Dentsu Diversity Lab in 2020, 80.1 percent of respondents said they were familiar with the term LGBT. But only 5.7 percent said they had heard of aromanticism and asexuality and knew what they meant.

Nakamura provided advice for the show, alongside Haruka Imatoku, to ensure that it accurately reflects the lives of those in the community.

Imatoku, 27, is the top director of Nijiiro Gakko, a nonprofit organization based in Tokyo, which has been hosting social gatherings for sexual minorities other than LGBT, including asexual people, since 2016.

Participants at the events can speak freely about uncomfortable remarks they receive in their daily lives. Such remarks are often based on the misconception that romance is common for everyone in life.

Shunya Okajima, 32, an administrative scrivener who submits legal documents on behalf of his clients, knows this well.

He joined a gathering like one of these meetups five years ago, and identified himself as being aromantic and asexual.

Although Okajima had never met any of the participants, he sympathized with what each had experienced and felt so comfortable it was as if he had known them for many years.

As he spoke with other participants, he learned that many of them are not comfortable with the idea of marriage because it is often connected to romance, but they still want to find a partner to spend their life together.

Okajima said he wants to work with aromantic and asexual people to explore relationships alternative to marriage and help them with their wills and inheritance matters--one of the many areas of life where they face difficulties due to being misunderstood.

(This article was written by Hiroki Ito, Midori Iki and Honomi Honma.)