GOHAN LAB/ Fried noodles: Magic of steam produces springy noodles that are a notch above 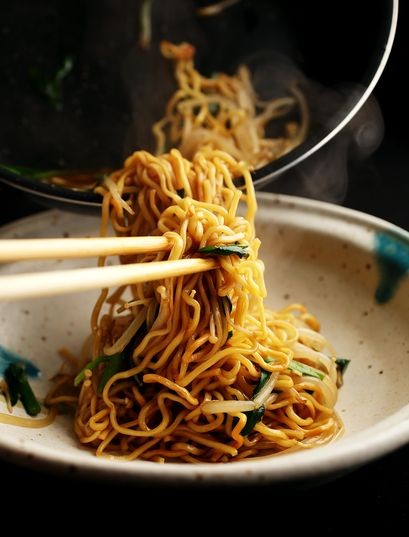 Fried noodles are the focus this week of our series on popular staple dishes. Chinese noodles sold in packets with sauce are naturally enjoyable, but a simple cooking step results in chewy noodles that taste quite authentic.

Katsuhiko Yoshida, a chef of Chinese cuisine, recommends a method where fresh noodles (called “nama-men” as opposed to the “mushi-men,” literally steamed noodles) are steamed before being fried. Admittedly, the elasticity of the noodles is completely different. The ingredients to be added were kept simple.

When cooking, a key is not to move the noodles around too much after placing them in the frying pan. This is to lightly brown the part touching the pan yet keep the center of the noodles soft.

After the ingredients are added, mix thoroughly. By the time the liquid disappears, you end up with umami from the “enoki” mushroom and beansprouts that are nice and crisp.

This week’s Gohan Lab is the last that will involve Yoshida. His message to readers is, “What you cook may not turn out well the first time, but try again and again. Enjoy cooking.”

2. To get moist finish, plunge noodles in water and drain. Pour water in frying pan to 2 cm in depth and turn on heat. When steam starts rising, set steamer, spread noodles inside, place lid and steam for 3 minutes on medium heat (PHOTO A). Remove steamer and pour out water from pan.

3. Pour oil in pan and place on high heat. When oil has warmed, add steamed noodles and turn down to low heat. Turn when one side is lightly brown (PHOTO B).

4. Place nira, beansprouts, enoki and 100 ml water on noodles and turn up to high heat. Add seasonings and stir-fry (PHOTO C). When liquid comes to a boil, lower to medium heat and keep cooking until almost no liquid remains.

Midori Kasai is a professor emerita at Ochanomizu University and former chairwoman of the Japan Society of Cookery Science.

Salad with steamed noodles (Serves one)