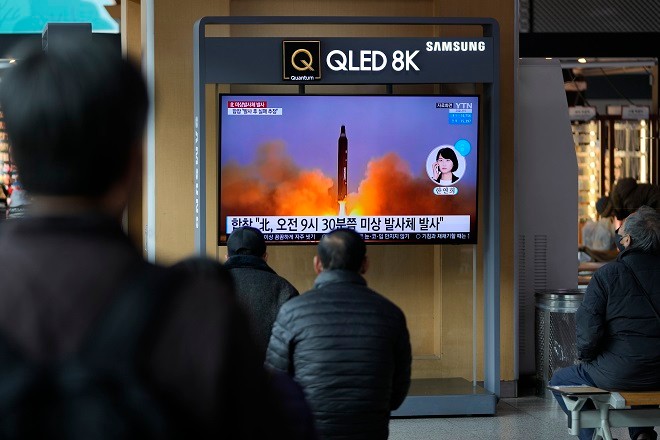 SEOUL--A North Korean missile fired from its capital region exploded soon after liftoff in an apparent failed weapons launch on Wednesday, South Korea’s military said, amid speculation that the North is preparing to launch its longest-range missile in its most significant provocation in years.

Details of the missile explosion weren’t immediately known. But the launch, the 10th of its kind this year, shows North Korea is determined to press ahead on its push to modernize its weapons arsenal and pressure its rivals into making concessions amid dormant denuclearization talks.

The North Korean missile blew up while it was flying at an altitude of less than 20 kilometers (12.4 miles), a South Korean military official said requesting anonymity because he wasn’t publicly authorized to speak to media on the issue. He said the cause of the explosion wasn’t known.

South Korea’s Joint Chiefs of Staff earlier said that the launch was made from the Pyongyang region around 9:30 a.m. (0030 GMT) but gave no other details.

Lee Choon Geun, an honorary research fellow at South Korea’s Science and Technology Policy Institute, said the missile likely exploded less than a minute after its launch. He said if the missile’s toxic fuels fell on civilian residential areas in North Korea, they would likely cause a major health impact. There was no immediate outside report of such damages in North Korea.

The U.S. Indo-Pacific Command later said that North Korea had fired a ballistic missile but didn’t say whether it was a failed launch. A command statement said the launch didn’t pose an immediate threat to U.S. territory and its allies but called on North Korea to refrain from further destabilizing acts.

Japanese Chief Cabinet Secretary Hirokazu Matsuno told reporters that a flight of a ballistic missile has not been confirmed and that Tokyo is working with Washington and Seoul to further analyze what happened.

Experts say past failures have moved North Korea closer to its goal of acquiring a viable nuclear arsenal that could threaten the American homeland. Of eight “Musudan” intermediate-range missiles tests in 2016, only one of those launches was seen by outside analysts as successful, which led to debates of whether North Korea’s path toward ICBMs had been cut off.

However, the North in 2017 flew more powerful intermediate-range missiles over Japan and conducted three successful test-flights of ICBMs that demonstrated a potential range to strike deep into the U.S. mainland.

North Korea’s successful satellite launches in 2012 and 2016 — which were viewed by the U.N. as disguised tests of its long-range missile technology — also followed repeated failures.

The U.S. and South Korean militaries said last week that North Korea had tested an ICBM system in two recent launches, referring to the developmental Hwasong-17 missile, the North’s biggest weapon, which it unveiled during a military parade in October 2020.

In the two recent launches on Feb. 27 and March 5, the North Korean missiles flew medium-range distances, and experts have said North Korea likely tested the first stage rocket of the Hwasong-17 missile. It wasn’t clear if Wednesday’s launch also involved parts of the Hwasong-17.

After its two previous launches, North Korea said it had tested cameras and other systems for a spy satellite and released what it said were photos taken from space during one of the two tests, but it didn’t confirm what rocket or missile it launched.

Observers say North Korea aims to boost its ICBM capability while trying to place its first functioning spy satellite into orbit. North Korean leader Kim Jong Un has vowed to acquire an improved ICBM and a spy satellite among an array of sophisticated weapons systems he says his country needs to cope with what he calls American hostility.

Earlier Wednesday, North Korea’s state news agency released photos of a smiling Kim, clad in a long black leather coat, visiting a towering apartment complex under construction on the outskirts of Pyongyang. The news agency didn’t say when Kim was there, but it typically reports on his public activities one or two days after they occur.

The Hwasong-17 could potentially fly up to 15,000 kilometers (9,320 miles), far enough to strike anywhere in the U.S. and beyond. The 25-meter (82-foot) missile, which was shown again at a defense exhibition in Pyongyang last year, has yet to be test-launched.

The three ICBMs that North Korea tested in 2017 were the Hwasong-14 and Hwasong-15. Some analysts say developing a larger missile could mean the country is trying to arm its long-range weapons with multiple warheads to overcome missile defense systems.

If North Korea makes a new ICBM launch, it would be its highest-profile weapons tests since its third and last ICBM launch in November 2017.

North Korea may call its potential new ICBM test a rocket launch to place a reconnaissance satellite in space, not a weapons test. That could invite condemnation but likely no fresh U.N. sanctions, some analysts say, since Russia and China wield vetoes on the Security Council and would oppose it.

U.S.-led diplomacy aimed at persuading North Korea to abandon its nuclear program collapsed in 2019 due to wrangling over U.S.-led sanctions on the North. Washington has urged North Korea to return to talks without any preconditions, but Pyongyang has rejected such overtures saying the United States must first withdraw its hostile policies.

In January, North Korea hinted at lifting its four-year moratorium on ICBM and nuclear tests. South Korea’s Defense Ministry said Friday it detected signs that North Korea likely is restoring some of the tunnels at its nuclear testing site that it detonated ahead of the now-dormant nuclear diplomacy.