A Tohoku Shinkansen train bound for Sendai derailed in Shiroishi, Miyagi Prefecture, after a powerful earthquake on the evening of March 16. (Takahiro Kumakura) 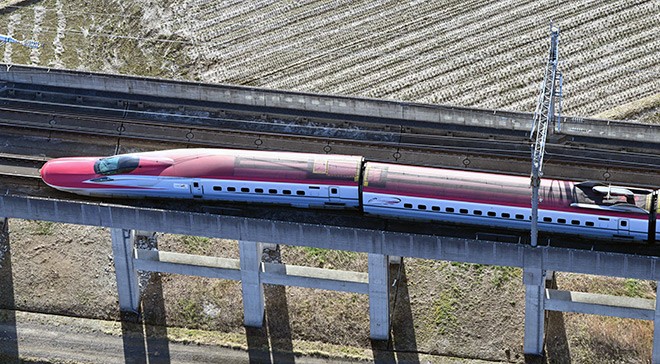 The powerful earthquake that struck off the coast of Fukushima Prefecture on March 16 killed three people, injured at least 107 and caused widespread disruptions on railway lines and roads, government officials said.

The Japan Meteorological Agency said the magnitude-7.4 quake occurred at 11:36 p.m. on March 16, with its focus 57 kilometers deep.

The earthquake in northeastern Japan was felt even in Kyushu in the southern part of the country.

The agency has urged residents in the Tohoku region to be on alert for additional quakes of upper 6 over the following seven days or so.

A man in his 60s in Soma, Fukushima Prefecture, was found collapsed in front of a house shortly after the quake. His death was later confirmed.

Quake-related injuries were reported in nine prefectures, mainly in the Tohoku region, according to the Fire and Disaster Management Agency.

The earthquake triggered a tsunami alert in Miyagi and Fukushima prefectures, but it was lifted at 5 a.m. on March 17.

In Ishinomaki, Miyagi Prefecture, a 30-centimeter tsunami was observed at 2:14 a.m., while the prefectural capital of Sendai observed a 20-cm wave at 1:46 a.m.

The earthquake also cut electricity to more than 2.2 million homes in the Kanto, Tohoku and other regions, including the Tokyo area. An intensity of 4 was recorded in the 23 wards of the capital.

The Tohoku Shinkansen’s Yamabiko 223 derailed at 11:36 p.m. on March 16 around 2 km southwest of Shiroishi-Zao Station in Miyagi Prefecture.

The 17 train cars remained upright, and the 75 passengers and three crew members were not injured. They walked on an elevated railroad track and used an emergency exit to reach ground level, where they were picked up by buses for Shiroishi-Zao or Sendai stations.

East Japan Railway Co. (JR East) said 60 axles on 16 train cars came off the rails. It is inspecting the damage. The Japan Transport Safety Board has also dispatched two inspectors to the derailment location.

A JR East representative said it will “take a considerable amount of time” to resume operations.

The derailment forced the company to suspend operations of the Tohoku Shinkansen between Nasushiobara and Morioka stations for all of March 17.

The company has put fewer trains into service between Tokyo and Nasushiobara, as well as between Morioka and Shin-Aomori.

According to the transport ministry, it was the second derailment of a bullet train during operations.

A Joetsu Shinkansen train derailed in the Niigata Prefecture Chuetsu Earthquake in 2004, and it took two months to resume full operations of the service, according to JR East.

A 50-meter-long crack that was 30 to 50 cm wide was confirmed on an outbound lane of the expressway between the Kunimi Interchange and the Shiroishi Interchange. The crack created an unevenness of about 10 cm.

On an inbound lane of the Joban Expressway, a crack 30 cm wide and more than 10 meters long was found between the Shinchi Interchange and the Yamamoto Interchange.

As of 8:30 a.m. of March 17, sections of five roads, including the Tohoku and Joban expressways and the Sanriku Coastal Road, were closed to traffic.

The Japan Meteorological Agency said the epicenter of the quake indicates that it was an aftershock of the hugely destructive Great East Japan Earthquake in March 2011.

The agency believes the latest quake occurred within the Pacific plate of the ocean side, which subducts the North American plate on the land side.

The agency said the mechanism is different from the 2011 earthquake, which occurred on the border of these two plates.

The agency said that at 11:34 p.m. on March 16, a magnitude-6.1 earthquake occurred, with a maximum seismic intensity of lower 5. Two minutes later, the larger quake struck.

He said a series of big quakes is expected in the near future, and he urged residents to watch out for tremors and tsunami.

This article was corrected on March 18 to change the number of deaths from four to three.

The number of deaths was reported as four on the morning of March 17 based on information from the central and local governments. But officials were unable to confirm that the death of a man in his 80s in Shiogama, Miyagi Prefecture, was related to the earthquake.