Paper partitions revived from 3/11 to give Ukrainian evacuees privacy 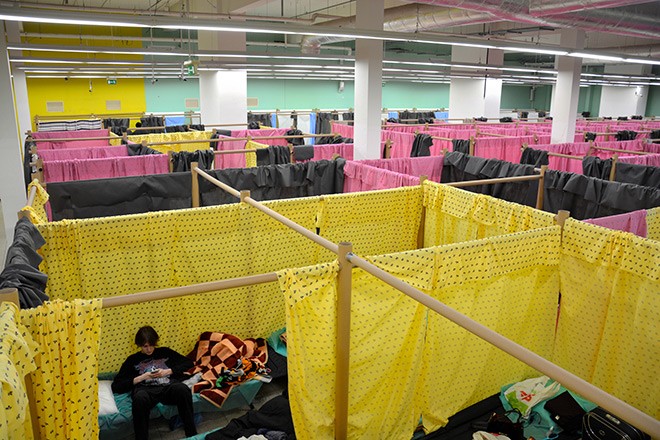 A Ukrainian evacuee rests in a partition space modeled off of a design by Japanese architect Shigeru Ban that uses cardboard-tube frames at a shelter in Chełm in Poland on March 13. (Provided by Jerzy Latka)

When Ukrainians began evacuating from their homeland, Shigeru Ban, 64, learned from media reports that they were sleeping on folding beds in cramped shelters without any privacy and he felt compelled to help.

“They are called evacuees, but they are ordinary people like us,” he said. “They are with their family members, just like survivors of natural disasters are after emergencies. But the big difference is that Ukrainian evacuees are not with their husbands or fathers. Ukrainian men are basically banned from leaving the country. It’s sad.”

Having set up temporary housing in disaster-hit areas around the world, from Japan to Turkey and China, Ban stayed in Chełm, a city in eastern Poland, from March 11 to March 13, to lend his expertise making doing-it-yourself shelter spaces out of cheap, sustainable and easy-to-use materials.

Modeled on what he set up at shelters for survivors of the 2011 quake, volunteers set up a series of cardboard tubes in a shelter where Ukrainians are taking refuge following the Russian invasion of their country.

Those tubes are used to drape curtains that divide the space, like makeshift cubicles or hospital bed partitions.

The partition system uses cardboard tubes as pillars and beams. The tubes are just like the ones commonly used to roll up fabric or paper, but much longer--approximately 2 meters in length.

The simple contribution has returned a lost and precious comfort to the evacuees huddled under one big roof: time to themselves.

“A natural disaster, whether it’s an earthquake or flood, subsides at some point after you evacuate (from the area). However, this time, we don’t know when the war will end,” Ban said. “So, I think their state of mind is quite different from that of natural disaster survivors.”

He was told that at one location, a Ukrainian woman who had been putting on a brave face suddenly burst into tears when she entered one of the separated spaces.

“I think her tension dissipated a little once she was in a place where her privacy was protected,” he said. “That shows you how hard times are for her.”

The shelter space initiative started when Ban told a friend, a Polish architect, about his idea of setting up the partitions for Ukrainian evacuees. His friend responded that they should do it as soon as possible.

The Polish architect contacted a cardboard tube manufacturer in Poland, which agreed to suspend all other work to produce tubes for the evacuees free of charge. Through the Polish architect’s connection, it was decided that Ban’s partition system would be set up at a shelter in Chełm, which is 25 kilometers west of the Ukrainian border.

Evacuees arrive in Chelm by train and stay there temporarily before moving to shelters in other areas.

The team divided what was previously a supermarket into 319 partition spaces, one of which can cover two to six evacuees.

Around 20 students at Wroclaw University of Science and Technology set up the partitions. Their Polish professor is even a former student of Ban’s at a university in Kyoto.

Normally when Ban works in a far-flung location, he personally visits the worksite to ascertain what the situation is like on the ground, instruct people taking part in the work and speak with local politicians, if necessary.

But this time, the work unfolded so quickly and with such ease that such on-site work turned out to be unnecessary.

He said when he arrived, he quickly found the rollout was already going smoothly.

“There is a manual on how to set up the partitions, which any architect can use to assemble them," Ban said. "I thought I was going to set it up together with local people while giving instructions to them. But that wasn’t even necessary.”

Once the partitions went up, Ukrainian evacuees came to the shelter.

“They were so delighted with the partitions,” Ban said, adding that he believes that privacy is something humans naturally crave and require.

His partition system has also been set up in a train station in Wroclaw, the city where the university that Ban’s former student teaches is located. That one provides 60 partitioned spaces.