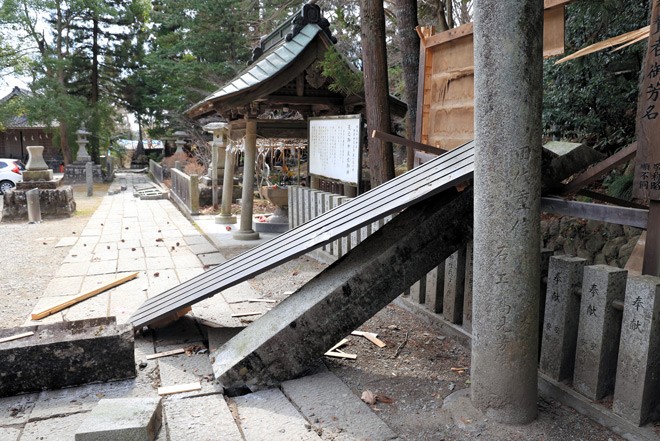 Lanterns are seen collapsed by an earthquake at Soma Nakamurajinja shrine in Soma, Fukushima Prefecture, on March 17. (Shiro Nishihata)

Just days after the anniversary of the 2011 Great East Japan Earthquake, many residents in Miyagi and Fukushima prefectures thought they were reliving the nightmare as a powerful earthquake struck late on March 16.

Residents had flashbacks and wondered if their worst dreams were coming true again.

Shuto Sekine, a 21-year-old student, was with his friends at an izakaya restaurant near JR Fukushima Station when the earthquake hit at 11:36 p.m.

“After the first tremor, we went outside,” he said.

That moment, he felt the second jolt. Sekine turned around and saw the quake had caused severe damage inside the restaurant.

“It revived memories of the Great East Japan Earthquake. I was an elementary school student at the time,” he said.

In Soma, Fukushima Prefecture, where a maximum intensity of upper 6 on the Japanese seismic scale of 7 was recorded, Hideaki Sahara, 74, was asleep.

But the first tremor woke him up. Then a bigger quake hit.

Sahara was greatly relieved that he was awakened by the first jolt.

“I was sleeping in front of a 'tansu' chest. Had I stayed asleep and remained lying underneath it, I would have been buried under it.”

But his house did not stay intact. He found the aluminum sash windows had fallen away.

On the morning of March 17, Sahara was busy cleaning broken glass.

In the 2011 quake, tiles from his roof fell to the ground but that was the extent of the damage, he said.

“But this time, I don’t have running water,” he said.

The area was struck with a big quake in February 2021, too.

“The tremor (last night) was even worse,” he said.

The house has been vacant since the 2011 disaster, according to Akio Okuyama, 79, who owns the property.

Okuyama was at another house in the town when the quake hit. The strong jolt forced him to hold onto furniture to keep it from toppling over.

After the shaking stopped, he rushed to the vacant house to check its status only to find it in shambles.

“Last night’s tremor was as strong as the 2011 quake, and it was hard to remain standing,” he said.

Many residents in coastal areas in these prefectures applied a lesson learned from the tragedy 11 years ago.

A community hall on a hill in Kesennuma, Miyagi Prefecture, was packed with residents fleeing to safety from a possible tsunami in the wee hours of March 17.

A 57-year-old woman took her family members, including her 91-year-old mother, to the facility.

At a little past midnight, she was seen huddled on a couch near the entrance, with her arms wrapped around her mother.

“The second tremor was so big, and I just knew it was bad,” the younger woman said. “So we ran with nothing but the clothes on our backs.”

Still, she did not forget to take her wallet, her mother’s blood pressure medication and masks for COVID-19 protection, she said.

In Ishinomaki, Miyagi Prefecture, 53 people were staying overnight at a city gymnasium on higher ground as of 2 a.m.

Some people sat or slept around a large stove in a martial arts gym, while many others stayed in cars parked outside.

A 63-year-old woman quickly exited her home, which is public housing for the 2011 disaster victims.

With her dog, she ran toward a nearby hill called Hiyoriyama. On her way, a female stranger offered her a ride to the gymnasium.

During the dash, the memories from 11 years ago returned to haunt her. The massive tsunami engulfed her apartment and she was sinking in the water and had a narrow escape from death.

“I was really shocked and am scared,” she said.

A copper statue of Date Masamune, a powerful warlord who ruled the area in the Period of Warring States and the Edo Period, was cracked and tilted by the earthquake.

The city government has taken emergency steps to restore the iconic equestrian statue, which is nine meters high.

The original statue was made by Toru Komuro, a local sculptor, in 1935.

It was scrapped during World War II to contribute metals to help the war effort.

The statue was restored in 1964 and has remained a symbol of the city. It escaped damage in the 2011 disaster.

This time, parts of the stone walls and stone lanterns on the former castle site were also found damaged and collapsed.

In an area, rocks and dirt from the fallen stone walls blocked the road for a span of about 10 meters wide.

The castle’s stone walls were also damaged in the 2011 disaster. Restoration work started in 2012 and was completed three years later.