Princess Aiko holds her first news conference as an adult

Princess Aiko holds her first news conference as an adult at the Imperial Palace in Tokyo on March 17. (Provided by the Imperial Household Agency) 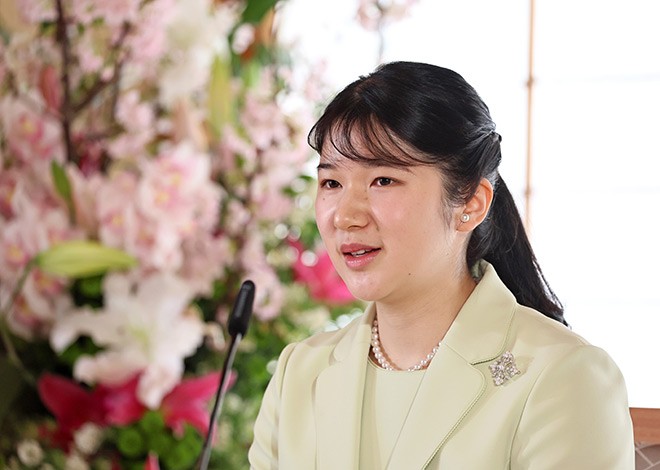 Princess Aiko responds to a question at the March 17 news conference. (Pool)

Princess Aiko held her first news conference since becoming an adult member of the imperial family on March 17.

“While cherishing each and every duty that I carry out, I want to do my best to be of help to the emperor and empress, as well as other imperial family members,” she said at a news conference that lasted about 30 minutes.

The only child of Emperor Naruhito and Empress Masako, Aiko turned 20 on Dec. 1, but at that time she only released a statement about her feelings on becoming an adult member of the imperial family.

While it has been customary for imperial family members to address the media upon turning 20, Imperial Household Agency officials sided with Aiko’s desire to place priority on her studies. So, the news conference was pushed back until March 17, during her spring break.

At the start of the news conference, Aiko touched upon the strong earthquake that struck the Tohoku region late on the previous night.

"I extend my deepest sympathy to bereaved family members as well as those who suffered damage as a result of the natural disaster," she said.

Regarding the role of imperial family members, Aiko referred to what her parents have often said about wanting to share in the public’s joy and sorrow while carrying out their duties.

"I believe that is the fundamental and most important point," Aiko said.

She revealed that she has become interested in the work volunteers do at disaster sites through the activities of a friend who has gone to Fukushima Prefecture as a volunteer to help in the reconstruction efforts there.

Aiko is currently a sophomore at Gakushuin University, majoring in Japanese language and literature.

In keeping with the tradition of the imperial family, Aiko attended educational institutions affiliated with Gakushuin University throughout her education, from elementary through high school.

Her cousin, Prince Hisahito, the only son of Crown Prince Fumihito, has broken with tradition and plans to enter the high school affiliated with the University of Tsukuba in April.

At the news conference, Aiko was asked about Hisahito's older sister who married last year to become Mako Komuro.

"She was like a dependable older sister to me, and I will always remember with gratitude how she was so friendly and kind to me," Aiko said. "As her cousin, I pray that she will be happy for many years."

Aiko took part in a short summer program at Britain's prestigious Eton College on the outskirts of London that started in July 2018. That experience left a deep impression on her as she expressed her feelings in her first poem as an adult member of the imperial family at the New Year Poetry Reading at the Imperial Palace held in January.

A translation of her poem is: “As I stand before/ The House of learning where I shall study in Britain,/ I feel the windows to the world/ Are opening up to me”