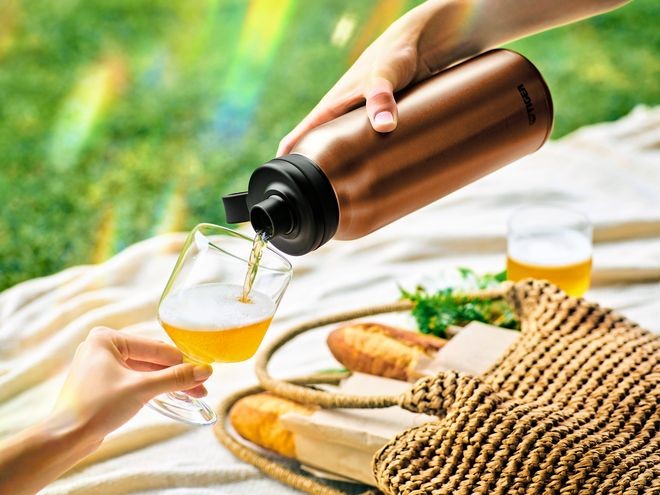 Vacuum-insulated bottles that keep carbonated drinks from losing their fizz are now being pitched to beer lovers who want something stronger when they are enjoying the great outdoors or simply chilling at home.

The trend was triggered by a growing number of people who now telework from home because of the novel coronavirus pandemic or seek to escape for a while from the hubbub of city life.

To win over new customers, manufacturers are marketing products with well-arranged cap and bottle designs so carbonic acid gas generated inside does not pose a safety risk.

Its top and screw parts feature a hole and a groove that allow internal pressure to be relieved when the pressure inside becomes too high and when the cap is partially opened. This ensures the top will not fly off due to gas pressure and prevent the bottle from breaking.

The cap needs to be removed after the initial unscrewing to release the internal pressure. Fluid in the stainless steel bottle is guaranteed to stay at a temperature of 10 degrees or lower for six hours owing to the vacuum-insulated structure.

Thermos released its first soda canteen in 2000, but sales were sluggish due to the widespread use of plastic bottles. The item was withdrawn from the market in 2004.

But with the rise in popularity of sugar-free soda drinks among increasingly health-conscious consumers during the COVID-19 crisis, Thermos said it developed its latest product in response to demand to be able to “carry cold fizzy drinks around.”

A Thermos representative said the company anticipates that the product will appeal to a broader range of consumers.

“Reusable bottles are frequently used by women and children, but we are hoping that demand will grow among men as well,” the official said.

It designed a cap that lets carbonic acid gas to be released when slowly rotated. It is also fitted with a safety valve to automatically relieve gas if the pressure inside rises.

The interior of the bottle was specially treated to remove surface asperities to stop carbonic acid from evaporating.

The product comes in four types priced at between 6,000 yen and 7,500 yen after tax. They range in size from 0.5 liter to 1.5 liters. The largest one is being promoted as a substitute for a beer pitcher.

U.S.-based Hydro Flask leads the pack in the category with its Growler brand for carbonated drinks.

Alco International Co., an Osaka-based company that handles exclusive sales of Hydro Flask in Japan, has focused on displaying the range of products at fancy goods stores and outdoor gear shops since 2016.

As craft beer is often sold by weight in the United States, a 1.9-liter vacuum bottle is now being marketed with a retail price of 9,350 yen, including tax.

Alco International said sales are rising due to the growing popularity of camping and other outdoor activities that allow people to avoid crowded environments in the current health scare.