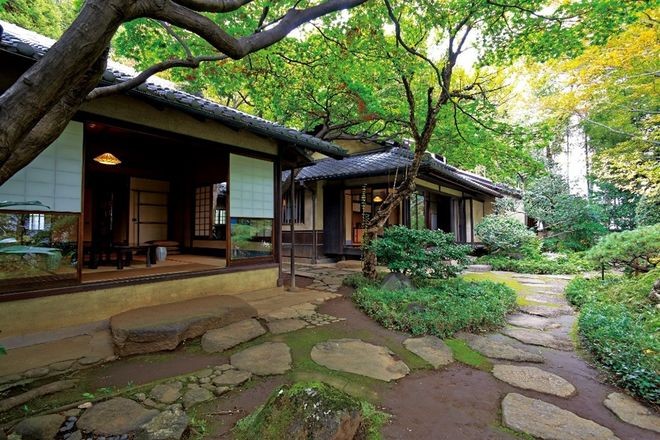 travel ban…
so much remains
to be seen
--Marion Clarke (Warrenpoint, Northern Ireland)

laundry day
she tells her side
of the story
--Vandana Parashar (Panchkula, India)

leaving less empty
than when I came
a pocketful of sand
--Alvin B. Cruz (Manila, Philippines)

in the quiet of a tearoom
a late chrysanthemum
dared to bloom
--Clotilde Wright (Boulder, Colorado)

The photo-haikuist received a grand prix award in the 11th Setouchi-Matsuyama International Photo-Haiku Contest for a subtly composed haiku that matched a photo of a peaceful environment where a famous author came to rest. The second line of the haiku invoked the name of the film “Late Chrysanthemums,” directed by Mikio Naruse in 1954, which was based on three short stories written by the poet and novelist Fumiko Hayashi (1903-1951). The superb third line rounded out the description of the protagonist who rose up from an unsettled working-class life to share her daring feminist views.

A photo-haikuist pen-named an’ya won an award for excellence by composing a joyful haiku that smiled right along with the wallaby in the photograph. Her first line anchored the idea that although the quokka is native to Western Australia, the adorable marsupial seems happy enough at Higashi-Matsuyama Zoo. A dash cuts the haiku, helping readers to understand that the grazing herbivore loves her grass as much as the photo-haikuist loves her bok choy.

a second home--
how great is the taste
of foreign greens

The 10 haiku highlighted at the top of this column were entered into a contest category that requested contestants to also take a photo of the sea. A grand prix was given to Marion Clarke, whose travel dreams were frustrated by the pandemic. Her camera-viewer looked through a fence and across a body of water to a greener shore with a pleasing sunlit background. The bold horizontal leading lines of the fence, the sea and the landscape stretched right across her wide-angle image. This artwork dovetailed with the sounds of despair from her haiku: though we want to, we cannot go.

In all, the contest attracted 4,491 artistic works. Notably, 2,365 contestants from 45 countries wrote in English. For the first time, entries in English exceeded those composed in the Japanese language.

Romanian haikuist Eduard Tara received an award for excellence in a category that asked contestants to write about one of 12 photos of Japanese tourist spots provided by the organizers. He matched a photo of a shrine with a haiku in which we hear just the interlocutor’s side of the dialogue, but we can sense the author’s reception of it through his description of the coldness of the stone staircase. If the answer had been “yes,” perhaps those sky-high 135 steps on the approach to Isaniwa Shrine in Matsuyama might have appeared warmer.

old stones
the “no” you said
between two steps

Reo Wakino received honorable mention for finding a haiku post box on a backstreet in Matsuyama.

No one here
Alone on an autumn night
Remember the post

In addition to her grand prix, Marion Clarke also won an honorable mention in the contest for this haiku that matched well with a photo of a heron taking flight from Gogoshima, Ehime Prefecture.

leaving day
I struggle with the weight
of departure

Inspired by the contest organizer’s photo of a small boy waiting patiently by an estuary, James Zemke submitted this haiku from Cambodia.

father’s return
delayed
by the tide

carving the air
with the old stories
morning light

Yota Fukumaru commiserated with a photo of a Buddha statue carved into the side of Mount Takatori in Yokosuka, Kanagawa Prefecture.

rock carving
resting in the shade
on a hot day

Rikka Mizutamari associated a cat’s tail to the silhouette of the sorin vertical shaft finial that tops Hokkiji Temple in Ikaruga, Nara Prefecture.

black cat
going to the temple
tail in the sky

Annette Akkerman from the Netherlands was happy to learn from a recent photo of Kumamoto Castle that it had been restored.

on display
shards of a porcelain cup
glued with gold

Ann Magyar meditated on a photo of Hiroshima Castle and its moat until she came up with this haiku that mirrored the calamity of modern-day wars and pestilence.

in the grip
of a whiteout--
snow globe

Congratulations to everyone who contributed to the success of the 11th Setouchi-Matsuyama International Photo-Haiku Contest in cooperation with The Asahi Shimbun.