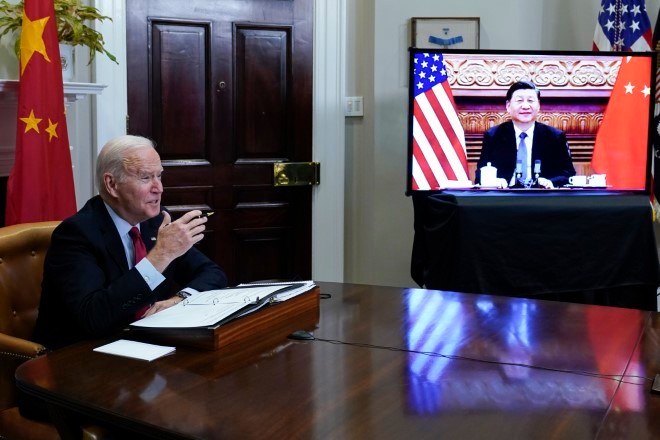 WASHINGTON--President Joe Biden set out to finally complete the “pivot to Asia,” a long-sought adjustment of U.S. foreign policy to better reflect the rise of America’s most significant military and economic competitor: China.

But Russia’s brutal invasion of Ukraine has made that vexing move even more complicated. China’s government has vacillated between full embrace and more measured responses as Russian President Vladimir Putin prosecutes his war, making the decisions for Biden far more layered.

Biden and China’s Xi Jinping are scheduled to speak by phone on Friday, a conversation that the White House says will center on “managing the competition between our two countries as well as Russia’s war against Ukraine and other issues of mutual concern.”

The Biden administration is left needing to focus east and west at the same time, balancing not simply economic imperatives but military ones as well.

“It’s difficult. It’s expensive,” Kurt Campbell, the coordinator for Indo-Pacific Affairs on the White House National Security Council, said during a recent forum of maintaining a high-level U.S. focus in two regions. “But it’s also essential, and I believe we’re entering a period where that’s what will be required of the United States and of this generation of Americans.”

Biden has been deeply invested in rallying NATO and Western allies to respond to Russia with crippling sanctions, supplying an overmatched Ukraine military with $2 billion in military assistance--including $800 million in new aid announced Wednesday--and addressing a growing humanitarian crisis.

Eastern flank NATO allies, including Estonia, Latvia, Lithuania, Poland and Romania, have made clear to the Biden administration that they want the U.S. to increase its military presence in the region and do more to address the worst humanitarian crisis in Europe since World War II. More than 3 million Ukrainian refugees have fled their country in recent weeks.

Though the war in Ukraine has dominated Biden’s focus of late, White House officials insist they haven’t lost sight of China — and are watching intently to see how Xi decides to play his hand.

In recent months, Biden has announced the sale of nuclear submarines to Australia and raised the profile of the Indo-Pacific security dialogue known as the Quad (Australia, India, Japan and the United States). He’s also called out China for military provocations against Taiwan, human rights abuses against ethnic minorities and efforts to squelch pro-democracy advocates in Hong Kong.

Biden’s national security team was somewhat surprised that Pacific partners--Australia, Japan, New Zealand, Singapore and South Korea--moved so quickly to hit Russia with sanctions following the invasion, according to a U.S. official familiar with the administration’s thinking.

The official, who spoke on condition of anonymity to talk about private discussions, said there was a recognition among the Pacific allies that Beijing is watching how the world responds to Russia as China calculates how aggressive it can be with its smaller neighbors in the region. In backing sanctions, the Pacific nations were trying to send a message to Xi as well as Putin, the official added.

From the first days of his presidency, Biden has said the aims of his China policy are to find ways to cooperate with Beijing on issues of mutual interest--such as stopping North Korea from developing nuclear weapons and coaxing Tehran to return to the Iran nuclear deal with the U.S., China, Russia and other world powers--and to avoid confrontation.

Still, Beijing’s approach to the Russian invasion is causing Washington concern. The White House has made clear to Beijing that throwing a lifeline to Russia’s collapsing economy or assisting its bruised military would be hazardous to a country that sees itself as the next great world power. The White House has not publicly specified what actions it would take should China assist Russia.

“We don’t need China to be with us. We just need them not to be against us,” said Frank Jannuzi, president of the Maureen and Mike Mansfield Foundation, which focuses on U.S.-Asia relations.

Xi and Putin met in early February, weeks before the invasion, with the Russian leader traveling to Beijing for the start of the Winter Olympics. During Putin’s visit, the two leaders issued a 5,000-word statement declaring limitless “friendship.”

In the days after Putin ordered the invasion, Xi’s government tried to distance itself from Russia’s offensive but avoided criticizing Moscow. The government has offered to act as mediator and denounced trade and financial sanctions against Russia.

At other moments, Beijing’s actions have been provocative.

Last week, Chinese foreign ministry spokesman Zhao Lijian echoed unsubstantiated Russian claims that there were 26 bio-labs and related facilities in Ukraine in “which the U.S. Department of Defense has absolute control.” The United Nations has said it has received no information backing up such accusations.

White House press secretary Jen Psaki took to Twitter to charge that the Russian claim was “preposterous” and could be part of an attempt by Russia to lay the groundwork for its own use of such weapons of mass destruction against Ukraine. She also blamed China for having “seemingly endorsed this propaganda.”

Xi’s government has also sought to use the conflict to accentuate Chinese ascendency and the decline of the West.

But China has its own internal troubles, including a major economic slowdown, difficulties that sanctions against Russia could make worse.

“The Ukraine war has proceeded in ways China did not expect and the war is not conducive to China’s rise or development,” said Xiong Zhiyong, professor of international relations at China Foreign Affairs University.

Still, concerns that China could come to Russia’s aid have only deepened at the White House in recent days.

On the same day of the Sullivan-Yang meeting, the U.S. informed Asian and European allies that American intelligence had determined that China had signaled to Russia that it would be willing to provide both military support for the campaign in Ukraine and financial backing to help stave off the impact of severe sanctions imposed by the West.

White House officials said Sullivan made clear there would be “severe” consequences should China assist Russia.

Ryan Hass, who served as China, Taiwan and Mongolia director at the NSC during the Obama administration, said Beijing faces a “momentous decision” on whether to aid Russia.

If Xi decides to do that, “It’s hard for me to see how the path remains open for China to maintain non-hostile relations with the United States and others in the West,” Hass said.

At the White House, Psaki has said any country doing business with Russia should “think about where you want to stand when the history books are written on this moment in time.”