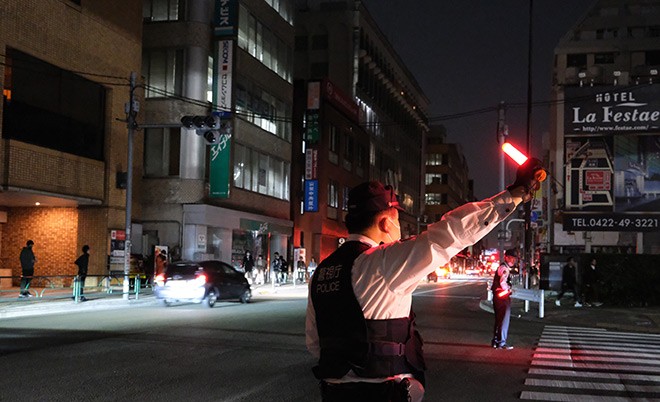 A police officer directs traffic in Musashino, western Tokyo, late on March 16 after power was cut off in the area. (Taku Hosokawa)

Tokyo-area residents who lost electricity after the March 16 earthquake in the northern Tohoku region were essentially forced to sacrifice their comfort for the greater good.

The temporary power outage in and around the capital was designed to prevent a blackout over a wider region caused by an imbalance in electricity supply and demand.

If a blackout does occur, it becomes much harder to restore electricity because recovery work must be conducted at each power plant.

In September 2018, a strong quake shook the main northern island of Hokkaido and damaged a thermal plant that supplied about half of the electricity to the prefecture.

Although various efforts were made, the supply-demand imbalance could not be avoided, and a blackout left all 2.95 million or so households in Hokkaido without electricity.

Power was not restored for close to two days after the quake struck.

The offshore earthquake late on March 16 registered an intensity of upper 6 on the Japanese seismic scale of 7 in parts of Miyagi and Fukushima prefectures.

Electricity was cut off to about 2.23 million households in 14 prefectures, including Tokyo, Saitama and Yamanashi that recorded much weaker seismic intensities.

Tokyo Electric Power Co. halted electricity to about 2.085 million households in nine prefectures, but power was fully restored about three hours after the quake.

Tohoku Electric Power Co. suspended electricity to about 148,000 households in five prefectures. Power was fully restored around 9:40 p.m. on March 17, about 12 hours after the quake struck.

The earthquake automatically stopped power generation at thermal power plants. For a certain period, TEPCO and Tohoku Electric lost about 10 percent of their generation capacity.

To maintain the supply-demand balance in electricity, the two utilities decided to forcibly suspend power supply to the 2.23 million or so households.

All electric power companies have plans in place to stop electricity depending on the power substation. That means some households can still receive electricity while others in the same general vicinity can be left without power.

An economy ministry official said the moves by the two utilities prevented a blackout.