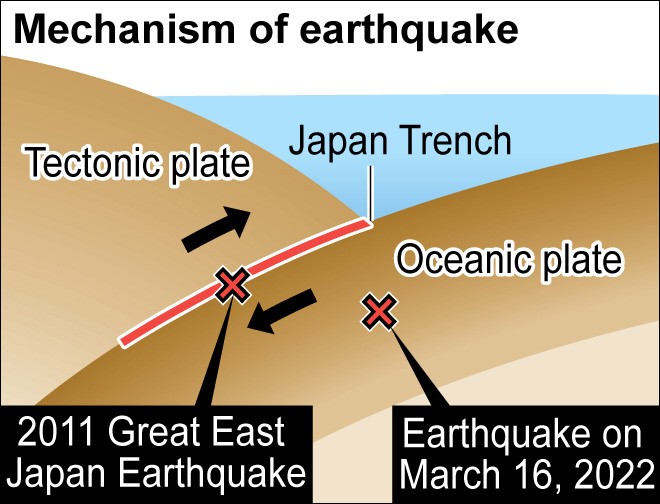 Similarities between the March 16 earthquake and a temblor that rattled the Tohoku region in February 2021 have fueled speculation that the offshore area has become an increasing hotspot for dangerous seismic activity.

The magnitudes of the two quakes were nearly the same—7.3 in 2021 and 7.4 on March 16—and their maximum intensities both reached upper 6 on the Japanese seismic scale of 7.

Location-wise, both quakes occurred at depths of around 60 kilometers and had nearly identical hypocenters off the coast of Fukushima Prefecture.

Hiroyuki Goto, associate professor of earthquake engineering at the disaster prevention research institute of Kyoto University, also noted that bedrock contained in the Pacific Plate, which lies beneath the Japanese archipelago, broke in both earthquakes.

Goto says it is possible that the northern bedrock area did not break in February 2021, but broke on March 16, resulting in an almost identical tremor.

Koshun Yamaoka, a professor of seismology at the earthquake and volcano research center of Nagoya University, said the area where the March 16 quake occurred has seen a lot of seismic activity in a short period of time.

In fact, a strong quake struck the same area just two minutes before the magnitude-7.4 earthquake.

Yamaoka said that area has long been prone to seismic activity, but the magnitude-9.0 Great East Japan Earthquake in 2011 has increased the likelihood of major temblors occurring there.

He said that although 11 years have passed since that devastating quake, large-scale crustal deformations are still occurring in the area, and earthquakes of around 7.0 magnitude are now striking there almost every year.

“People should prepare themselves for the possibility of another powerful quake over the next week,” Yamaoka said. “Not only that, they should always bear in mind that a big earthquake could strike on any day.”

(This article was written by Takahiro Takenouchi and Takuro Yamano.)