Economic sanctions against Russia a sore point for dentists 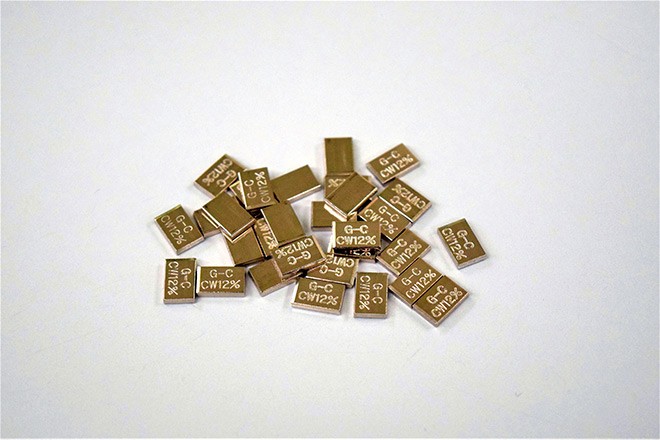 An alloy of gold, silver and palladium that is used to make a dental crown. One piece weighs 1 gram. (Naoyuki Himeno)

The shoe is on the other foot when it comes to dentistry these days. It is dentists who are feeling the pain.

A wave of economic sanctions imposed against Russia for its invasion of Ukraine last month has sparked concerns about supplies of palladium, a rare earth metal that is an essential ingredient for making dental crowns, causing prices to skyrocket.

Toshiaki Tanaka, head of Hirakawa Dental Clinic in Tokyo’s neighboring Kanagawa Prefecture and a director of the prefectural association of doctors and dentists, noted that dentists are now paying far more for palladium than they used to but are not being reimbursed for their additional costs under the national medical insurance system.

An alloy of gold, silver and palladium is the standard choice for dentists to fashion a dental crown due to the alloy’s strength and durability when patients want treatment covered by national health insurance.

Dental crowns can be made from another alloy that does not use palladium, but it is not as strong and tends to discolor over time.

The price of the alloy containing palladium has soared to unprecedented levels over fears of disruptions in the supply chain as a result of the sanctions.

Russia accounts for about 40 percent of global production of palladium. Together with South Africa, the two countries produce most of the world’s output of palladium.

Medical institutions do not receive higher reimbursement of medical fees corresponding to a rise in materials when they give treatment covered by the national health program because the fees are fixed.

Currently, the material fee for the alloy using palladium is set at 88,530 yen per 30 grams even though the latest purchase price is 30,000 yen more expensive.

The cost of palladium also fluctuated in the past as it is also used to make intricate electronic auto components.

The health ministry is set to review the price of the material on a quarterly basis from April due to the sharp price fluctuations.

The ministry is widely expected to raise material fees for the alloy when it reviews prices in July to reflect the rise resulting from the war against Ukraine. However, the price is expected to remain at the current level for the April review.

Tanaka noted that if the reimbursement of medical fees to clinics is increased, as is expected from July, to reflect the surge in the cost, patients will end up paying more to have a dental crown fitted.

Tanaka expressed concern that some people may put off going to a dentist, even though they have an aching tooth and are in desperate need of treatment, due to financial reasons.

He called on the government to take emergency steps to resolve the problem and suggested a provision like a government subsidy now available to rein in gasoline prices.

“I earnestly hope the government will address the dental alloy issue as part of its efforts to shore up the social infrastructure,” he said.