Work begins to get derailed bullet train back on track

People ｗork at the site of the derailed Tohoku Shinkansen Line bullet train in Shiroishi, Miyagi Prefecture, on the morning of March 20. (The Asahi Shimbun) 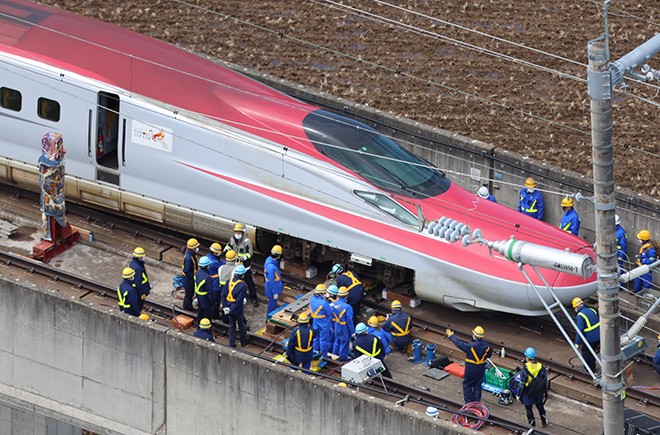 Workers at the site of the derailed Tohoku Shinkansen Line bullet train in Shiroishi, Miyagi Prefecture, on the morning of March 20 (Nobuo Fujiwara)

East Japan Railway Co. (JR East) began work March 20 to lift a bullet train that derailed in a powerful earthquake four days earlier and restore the track so that services on the Tohoku Shinkansen Line can resume.

More than 100 workers were dispatched to the derailment site in Shiroishi, Miyagi Prefecture, using jacks to lift each car weighing more than 40 tons.

JR East said it will take several days to complete the task.

Sixteen cars of the Yamabiko 223 train came off the rails about 2 kilometers from Shiroishi-Zao Station in Miyagi Prefecture, northeastern Japan.

The train made an emergency stop following the magnitude-7.4 quake off the coast of Fukushima Prefecture at 11:36 p.m. on March 16.

None of the 78 passengers and crew members were injured in the quake that registered a maximum intensity of upper 6 on the Japanese seismic scale of 7 at some locations.

JR East said 24 utility poles were damaged in the quake. It also said damage was confirmed at 20 structures, such as elevated railroad tracks in areas close to the quake’s epicenter.

The company said it will take “considerable time” before it can resume full operations.