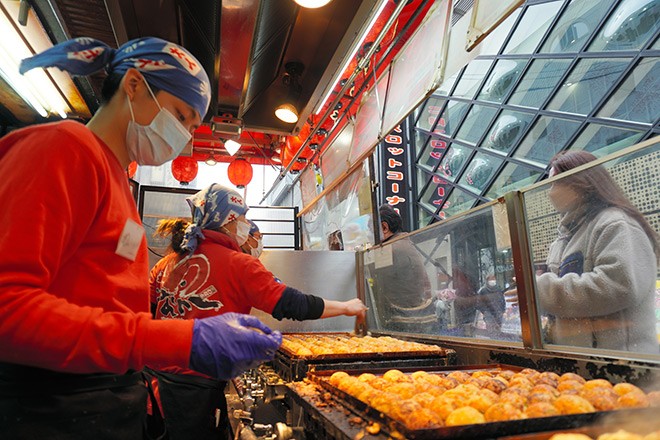 An Osaka shop selling takoyaki, or octopus dumplings, is concerned about rising costs of wheat and other ingredients due to the Ukraine crisis. (Taichi Higa)

Two-thirds of Japanese voters support the government’s economic sanctions against Russia over its invasion of Ukraine, even if the measures seriously hurt the domestic economy, an Asahi Shimbun survey showed.

That was far higher than the 19 percent of voters who disagreed with the sanctions, according to the nationwide telephone survey conducted on March 19 and 20.

Among all age groups, people in their 60s were most in favor of the continued sanctions, at 75 percent.

Thirty-four percent of respondents between 18 and 29 feel the sanctions should be lifted, the only age group to exceed 30 percent in this category, the survey showed.

Around 90 percent of respondents were concerned that other nations could be dragged into the war between Russia and Ukraine.

The approval rate for the Cabinet of Prime Minister Fumio Kishida was 50 percent, up from 45 percent in the previous survey in February and marking the highest figure since his administration was formed in October.

The disapproval rate was 25 percent, down from 30 percent in February.

Kishida in the Diet rejected suggestions that Japan be given the “nuclear sharing option” to allow U.S. nuclear weapons on Japanese territory for possible use in emergencies.

“(Nuclear sharing) is not consistent with one of the nation’s three non-nuclear principles of not permitting nuclear weapons into Japan,” he said.

Fifty-four percent of respondents said Japan should continue adhering to this principle, compared with 35 percent who favored the rethink.

The survey also asked about the possibility of nuclear weapons being used somewhere in the world in the next 10 years.

More than half of respondents, 51 percent, said “they would be used” while 38 percent said “they won’t be used.”

The results of that question were a reversal from a survey taken in 2005 to coincide with the 60th anniversary of the atomic bombings of Hiroshima and Nagasaki.

Although the survey method was different, the 2005 poll asked a similar question about the future use of nuclear weapons.

Thirty-eight percent thought that nuclear weapons would be used while 49 percent believed that they would not be used.

It received 553 replies from 1,123 households with at least one voter for a response rate of 49 percent. Among the 2,212 mobile phone users with voting rights contacted, 911, or 41 percent, gave valid responses. The survey obtained a total of 1,464 valid answers.